Rosa becomes hurricane off Mexico, could cause “life-threatening surf”

The U.S. National Hurricane Center said the storm was located about 510 miles west-southwest of Manzanillo and about 480 miles south-southwest of the southern tip of Baja California. Rosa had maximum sustained winds of about 75 mph and was moving west-northwest at 10 mph.

“Rapid strengthening is forecast to continue through tonight,” the hurricane center said in its advisory at 11 a.m. ET. “Afterward, strengthening should continue at a slower rate through Friday.”

The center predicted Rosa would then gradually weaken because of cooler water and drier air. Warm water is fuel for hurricanes.

Rosa was expected to cause “life-threatening surf and rip current conditions” late this week and over the weekend along the coast of southwestern Mexico and the southern Baja California Peninsula. 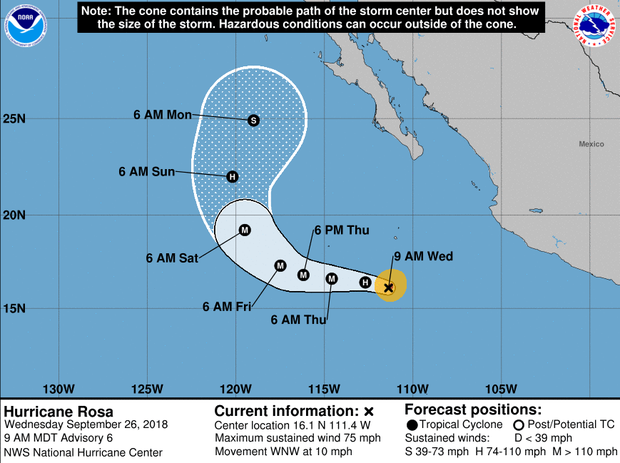 A map made by the National Hurricane Center shows Hurricane Rosa’s projected path as of 11 a.m. ET on Sept. 26, 2018.