While diamonds may be a girl’s best friend, rubies can be the real rock stars. The Sunrise Ruby, a 25.5-carat stone, made history in 2015 as the most expensive colored gemstone ever sold at auction, going for $30.3 million.

“If you look at a top-quality, gem quality ruby versus the top quality of a diamond – let’s say they’re five carats each – the ruby is going to be much rarer and much more expensive than that top-quality diamond,” said Daphne Lingon, the head of jewelry for Christie’s auction house in the U.S. “‘Cause they’re much harder to find, they’re much more limited resources.

“An exceptional ruby does not come along very often.”

“Some of the areas where you can find them are so remote, and that adds to the mystique of a fine-quality ruby,” said Brenda Harwick, who teaches at the Gemological Institute of America, one of the leading authorities when it comes to authenticating gemstones. “Nature created this, and it’s a treasure. And who doesn’t want a little treasure from the Earth?”

Geologically speaking, rubies and sapphires come from the same family. But the ruby’s rich, red fluorescent glow comes from the element chromium. 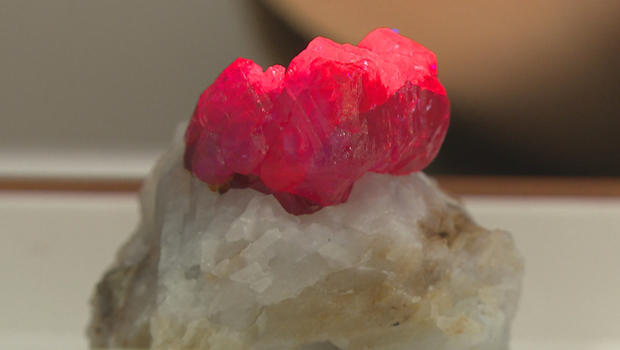 At one of the largest gem trade shows in the country, in Tucson, Arizona, gem dealer Bill Larson (also known as Burma Bill) said, “Ruby is just this exquisite red stone that once you see it, you’ll love it.”

And the holy grail of reds that Larson seeks out is what’s described as pigeon blood. “You want pure red, and that would be pigeon blood,” he said. “You don’t have to slaughter a pigeon! The eye has a membrane, and the color is fresh blood. That’s the color.”

A ruby is not only suited for Valentine’s Day; it’s also the traditional 40th anniversary gift.

Case in point: One of our most celebrated American songwriters, Irving Berlin, purchased a ruby for his wife, Ellin, for their 40th anniversary back in 1966. 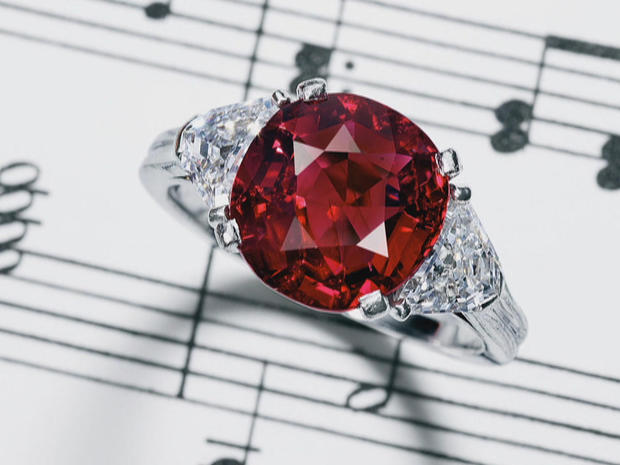 “It’s evocative of romance,” Lingon said. “And I think it’s the best sort of stone for that anniversary.“

Rubies … truly a cut above the rest. And if a great stone is like a work of art, they’re masterpieces.