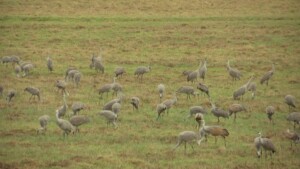 BIRCHWOOD, Tenn. (WDEF)- Bird watching enthusiasts are gathering along the Hiwassee River this weekend to enjoy some peak views.

While the views from the Hiwassee Refuge and Cherokee Memorial Park are breathtaking, guests can also learn about the area’s Cherokee history.

The Director of the Cherokee Memorial Removal Park, Nancy Williams, said that, “It started as a way to celebrate our natural history here. The migrating sandhills have been coming here for years. Far longer than what we thought when we first started this.”

The Sandhill Cranes come to Blythe’s Island where the Tennessee and Hiwassee meet during the winter from January to March from their homes in the Great Lakes.

One of the reasons the Sandhill Crane comes to migrate along the Hiwassee River is to feed on flat fields where they eat grains and invertebrates like worms. They also roost in the mud flats in the area. Their stature is nothing short of impressive.

Mime Barnes, the Outreach and Communications Coordinator for Region 3 of the Tennessee Wildlife Resources Agency (TWRA), describes that, “This is a four foot tall bird. Its wingspan is six feet or more, and their call can be heard for over a mile away.”

The Sandhill Crane has had a successful conservation effort, but another crane which is also on the Hiwassee has not been as fortunate.

The location of the festival, the Cherokee Removal Memorial Park, tells the history of the Cherokee who lived in the area and were removed during the Trail of Tears.

Williams says that,” When you walk on the wooden part of our trail over there. It is the old road bed that the Cherokee actually traveled on during the removal. We have our history plaza here that’s right behind us. It tells the story and removal. It has some history of the early Cherokees. The chiefs that actually went to England and met the King of England. It talks a bit about Sequoyah and how genius he was in creating a syllabary for his people.”

Students at local schools get their own exclusive experience on the Friday before the weekend of the Sandhill Crane Festival. There is a lot to learn for those who make the trek.

Williams describes that feeling as, “It’s just the energy of it, it’s so fantastic. And the people coming out to see the birds and learn about nature and the area. It’s really thrilling to be part of this.”

For those wanting to attend the Sandhill Crane Festival, you will need to park at the Birchwood Community Center along Highway 60. Once there, a shuttle will take you to the Hiwassee Refuge and Cherokee Removal Memorial Park for the festivities.

The Cherokee Memorial Park is open year round and hosts other events throughout the year. More information about the Sandhill Crane Festival can be found here.