BEIJING — It’s a race against time in Thailand to save the young members of a missing soccer team. Ranging in age from 11 to 16, they entered a cave five days ago after playing a soccer match nearby. Their bikes, backpacks and boots were found at the cave’s entrance.

The complex is an extensive network of chambers linked by passageways that often flood during heavy rains. A sign outside warns visitors that in the rainy months it’s not safe to go inside.

Rescue personnel are seen at the opening of the Tham Luang cave in Khun Nam Nang Non Forest Park in Chiang Rai on June 27, 2018 while operation continue for a missing children’s football team and their coach.

“If they do find the children, the next problem is how do they get them out,” one rescuer said.

They found some of the boys’ belongings along with footprints and handprints inside the cave.The assumption is that they got cut off by rising flood waters and could still be alive having fled deeper inside. 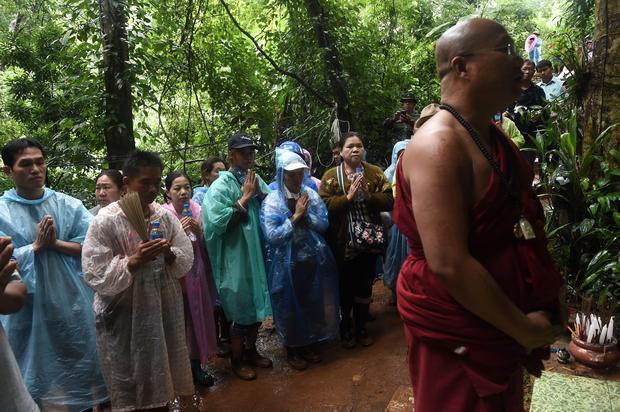 A Buddhist monk and relatives pray as they keep vigil near the Tham Luang cave in Khun Nam Nang Non Forest Park in Chiang Rai on June 27, 2018 while rescue personnel conduct operation for a missing children’s football team and their coach.

The challenge is the cave extends six miles, and rain is hampering the rescue effort as the water level had risen about six inches per hour. Navy divers can’t get through the narrow passages.

Distraught parents are holding vigil and hoping for a miracle as time seems to be running out.

On Wednesday, rescuers found a vertical shaft that appears to lead into the cave. They dropped in food and drinking water in case the children were nearby.