Why sending back too much stuff may get you blacklisted

The growing popularity of online shopping is changing the retail business and affecting everything from shopping malls to the shipping industry. It also means items are returned in greater numbers than ever before.

Free shipping and liberal return policies have made it easy to get a refund for almost anything. Eleven percent of all purchases are returned; some online stores see 30 percent of their sales returned. It’s created a massive secondary market, and it has some stores tracking what you bring back.

Consumer advocates are warning that, if you return too much, you could get blacklisted.

One Texas warehouse the size of two football fields is a veritable land of buyer’s remorse – receiving 400 truckloads a week of toys, bikes, large appliances, clothing and electronics. Just about everything here is something someone changed their mind about and returned.

Similar items, like cellphone cases and chargers, are boxed together and sold as a lot. All of it then goes up for sale or auction online, on sites like liquidation.com and secondipity.com.

Brian Johnson, of Liquidity Services, a major player in the almost $400 billion business of flipping returns, said, “Every box we open, every pallet we open, you never know what’s going to be in it.”

Correspondent Janet Shamlian asked, “Why don’t the retailers resell it themselves?” 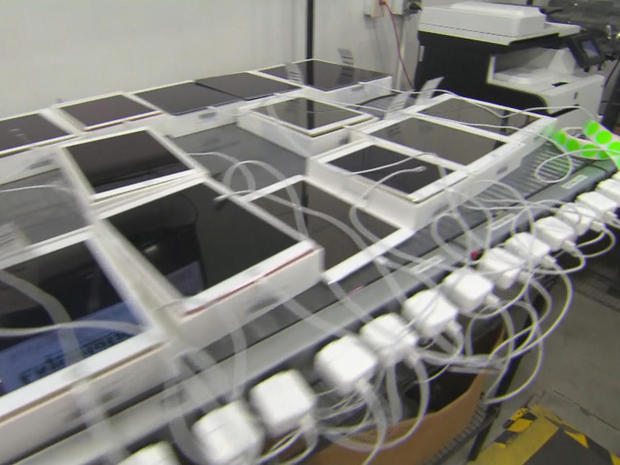 Rows of iPads being wiped and readied for resale. CBS News

“A lot of it is box damage,” said Johnson. “If you go in and you want to pay full price at a retailer, you want it in pristine condition.”

And handling returns themselves cuts into a store’s profits.

This time of year the Texas warehouse overflows with one item in particular: big-screen televisions.  They come flooding in after the Super Bowl and don’t stop for weeks, because people will buy them just to watch the Big Game – and return them immediately after.

Rafael Gaytan bought 25 of the returned TVs, as he does almost every week. Like so many buyers of the merchandise here, flipping it for a profit is his full-time job. 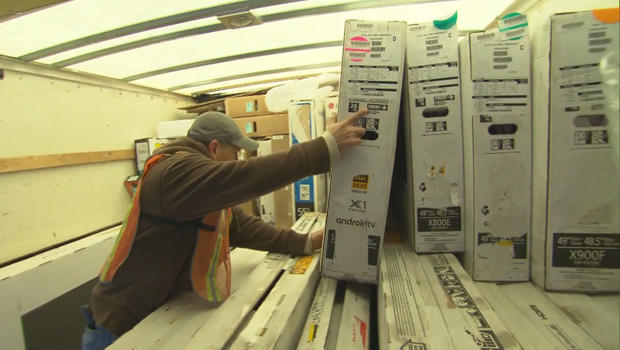 If you bought a large-screen TV just to watch the Super Bowl and then returned it, chances are Rafael Gaytan is reselling it. CBS News

The so-called wardrobing of items – buying items and returning them, like those big-screen televisions – is a growing problem for sellers. Many stores track how much merchandise a customer returns, sometimes denying future returns based on their history.

Best Buy discloses its tracking policy in fine print on the customer’s receipt, but some stores don’t. You likely won’t know if you’ve returned too much until a seller refuses to take it back.

Consumer advocates like Ed Mierzwinski, of the U.S. Public Interest Research Group, are concerned that data is increasingly being shared among retailers, creating a database of serial returners.

“There should be no secret databases,” Mierzwinslki  said. “Customers should be aware of everybody collecting information.

“I encourage any consumer who’s been denied the right to return a product become some database they didn’t know about said to the company ‘Don’t let him return that product,’ you should complain to the Federal Trade Commission.”