Officers say that a two day investigation began when officers pulled over a vehicle on Highway one-11 after witnessing what they believed to be a drug transaction.

They discovered suspected fentanyl and marijuana along with two guns, one that was stolen, and cash.

Three were arrested during the traffic stop.

The next day, a search warrant was served on a home on Houston Street by the Dunlap Police Department.

They found more fentanyl, marijuana, meth, and cash at this location along with two guns, one which was stolen.

Three more people were arrested in this search. 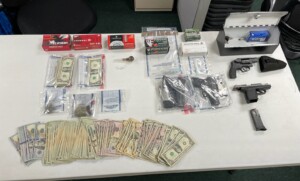