SIGNAL MOUNTAIN, Tenn. (WDEF)- A rash of house fires have left numerous families homeless in the Chattanooga area.One family on Signal Mountain was the victim of the latest house fire late Christmas Eve.

Kate Ling, a neighbor and friend of the Schimpf family on Arrow Drive, said shortly before 6 p.m. Christmas Eve, “My neighbor came flying over to the other side of my house to knock on the door. And there was this huge column of smoke streaming into the road. And then when I looked out our back porch I saw that their porch was on fire, and it was coming out of the side of their house, and their car was sparking and catching on fire, so we just ran.”

These were the moments that neighbors noticed their neighbor’s home had caught ablaze. They called the Signal Mountain Fire Department who arrived shortly after at 5:48 p.m.

According to Signal Mountain fire chief Eric Mitchell, the residents had left about 10 minutes before the fire began, according to family and friends to attend a Christmas party, leaving them unharmed.

Unfortunately, they have a pet cat that is yet to be accounted for as of midday Christmas. The fire department did not experience issues fighting the blaze due to frigid weather, and were still out fighting hot spots on Christmas morning. The cause of the fire is unknown and under investigation.

Neighbors describe the Schimpf family as very kind. Ling said that, “They’re such a wonderful family. They’ve been our best friends. I was pregnant with the mom at the same time and we went to our prenatal exercise classes together. They have a 7 month old and a 4 year old, and they’re just such a part of our neighborhood, so we’re all really brokenhearted about it.”

Ling urges you to share your Christmas spirit and help them out in this difficult time. She said that, “It’s Christmas Eve when it happened and I had to call her and tell her that her house is on fire. You never want to deliver that news but particularly on Christmas Eve, all of the boys’ presents were in the house, you have Santa coming the next morning, so we’re all trying to come together as a community for them.”

A family relative has set up a GoFundMe to help them as they begin rebuilding their lives. A link to the fundraiser to help out the Schmipf family is at https://www.gofundme.com/f/the-schimpf-family?qid=09207519f59944bcd4c5620e275b03a2. 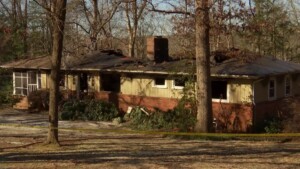