A slice of the pizza business

For one week every year, the center of the known pizza universe isn’t Naples, Italy, or New York, or even Chicago; it’s Las Vegas, when the International Pizza Expo rolls into town, bringing with it thousands of professional pizza-makers, dough tossers, at least one TV reporter nervous about his waistline, and LOTS of aspiring pizzaiolos (which is Italian for people hoping to grab their slice of the pizza business).

People like Sherry Nehl. Her dream of opening a pizzeria started back when she was living in a small Oregon town, working as a baker. “I would get requests for pizza because we just didn’t have a great pizza place,” she said.

“I’ve always loved baking. And my four boys and I, we would every Friday make pizzas. It was our pizza Fridays.”

Nehl came to Vegas to join the ranks of the 42,000 or so people in the United States that own independent pizza parlors, and she’s learning it won’t be easy. In fact, according to recent studies, more than half of restaurants that open fail in the first few years.

But Scott Sandler’s shop, Pizza Head in St. Louis, is one of the success stories. “There are just so many pitfalls in opening a place that it’s amazing any place succeeds,” he said.

Scott Sandler, of Pizza Head in St. Louis, at the International Pizza Expo in Las Vegas, where thousands of professional pizza-makers meet with aspiring pizzeria owners pursuing their dreams of rolling in dough. CBS News

Sandler came to the expo to extol the virtues of, of all things, vegan pizza. “It’s growing like crazy,” he said.

Sandler, who used to work on Wall Street managing a different kind of dough, is also teaching a class at the expo on what he calls “restaurant math.”

“A lot of people get into pizza and they’re romantic about it,” he said. “But they don’t know what the hell they’re doing. They don’t know margins.”

Anthony Falco knows margins, and industry trends, and really just about every aspect of the pizza business, and it’s knowledge he’ll share with you, for a price. You see, he’s an international pizza consultant (and yes, that’s really a job).

“Most of the people say, like, ‘That’s awesome. I wish I had known that was a job, and I could do it,'” said Falco. “And I’m like, ‘Oh, it’s really easy. Just spend ten years working 80 hours a week, building one of the most-recognized pizza brands in the United States!'”

Falco got his start at influential pizzeria Roberta’s in Brooklyn, N.Y., and has helped open restaurants on four continents, part of the global pizza industry which is worth an estimated $144 billion – which is a lot, considering pizza is often sold for just a few dollars a slice.

“You can go pretty far on sauce and cheese!” said Falco. “Like, the combination of hot cheese and sauce is pretty epic. And you throw pepperoni on there? When they say, ‘Bad pizza’s still pretty good,’ that’s what they’re talking about, is the cheese-sauce combination.

“The cooking of the delicious pizza is, like, the easiest, funnest part. Consistency [of] operations, like running a well-tuned machine, is really the hard part.”

But the key, Falco says, to really, really good pizza, is its base, the crust.

Correspondent Luke Burbank asked Falco, “Is this the perfect food?”

“Yeah, this right here. This pizza, this exact pizza is the perfect food,” Falco replied. “I mean, you got veggies, you’ve got herbs, and look, there you go, no tip sag!” 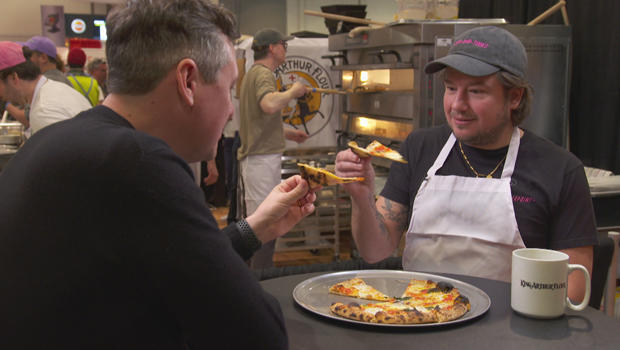 Aspiring pizza shop owner Sherry Nehl has been thinking about her crust for years, literally. “We’re going to do a sourdough,” she said. “And my starter, which is called a mother, is about 14 years old. So, it makes an excellent crust.”

“Whoa whoa whoa, wait a second. The dough that you’re gonna use for your restaurant, you’ve had the beginnings of that dough for 14 years?” asked Burbank.

“Yeah. It’s like my fifth child. You have to feed it!” she laughed. “Whenever we move, we move cross-country. And it was in the car with me the whole time. I fed it every day.”

Speaking of well-fed, Burbank had been feeding himself pizza for three solid days. Finally, it was time for a reckoning. The result was a pleasant surprise: gained just a couple of extra pounds. Who knows? Maybe it is true that what happens in Vegas really does stay there? One can only hope. 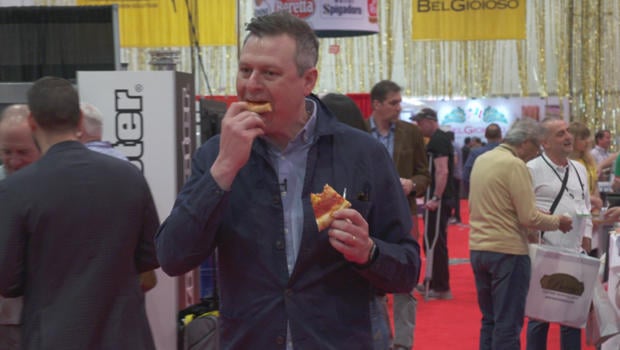 Investigative reporter Luke Burbank does his due diligence at the International Pizza Expo in Las Vegas. CBS News