A SpaceX Falcon 9 rocket roared to life and streaked away from Cape Canaveral early Sunday carrying the first in a powerful new generation of GPS navigation satellites into orbit. It was the California rocket builder’s 21st launch this year and its first Pentagon-sanctioned national security mission.

Propelled by 1.2 million pounds of thrust from its nine first stage engines, the 229-foot-tall rocket lifted off at 8:51 a.m. EST (GMT-5), climbing straight away from launch complex 40 at the Cape Canaveral Air Force Station. It was the 20th major rocket launch from Florida this year, the busiest pace since 1998.

The launching came five days late because of a last-minute problem with first stage propellant temperatures Tuesday and stormy weather Thursday. High winds forced another 24-hour delay Saturday, but conditions were ideal Sunday and the rocket put on a spectacular show as it raced away to the northeast through a cloudless sky.

Vice President Mike Pence, chairman of the newly reconstituted National Space Council, was on hand for Tuesday’s initial launch try but flew back to Washington after touring SpaceX facilities at the Kennedy Space Center.

“The most important thing is that we get that rocket up safely and securely and it achieves its mission,” Pence told spaceport workers. “I know this bird is going to fly and when it flies, it’s going to make a difference for the security and prosperity of the American people.”

Pence has taken an active role in directing the Trump administration’s revised national space policy, calling for establishment of a military “Space Force,” increased commercial development in low-Earth orbit and continued NASA development of a huge new rocket and spacecraft to carry astronauts back to the moon.

The early moments of the flight Sunday appeared normal and two minutes and 48 seconds after liftoff, now well out of the dense lower atmosphere, the first stage engines shut down and the booster fell away. An instant later the single engine powering the Falcon 9’s second stage ignited as planned.

In a departure from what has become normal practice for SpaceX, the first stage did not attempt to fly itself back to Cape Canaveral or to an off-shore drone ship. The GPS satellite was loaded with more fuel than usual, increasing the load on the Falcon 9 and requiring more first stage performance. The rocket did not have enough propellant left over to attempt a landing.

“The first flight, we’re … making sure we are taking care of the spacecraft, making sure we meet all of its requirements,” said Walter Lauderdale, chief of Falcon Systems Operations Division at the Air Force Space and Missile Center. “It’s precious cargo, and we want to make sure that it’s up there to do its job.”

The Falcon 9’s second stage completed the first of two planned “burns,” putting the vehicle in the planned preliminary orbit about eight minutes and 16 seconds after launch. A second firing an hour later completed the launch phase of the mission. The GPS 3 satellite was released to fly on its own just under two hours into the mission.

Using its on-board propulsion, the GPS 3 satellite is expected to make its way to a 12,500-mile-high orbit tilted 55 degrees to the equator, taking about 12 hours to complete one orbit. 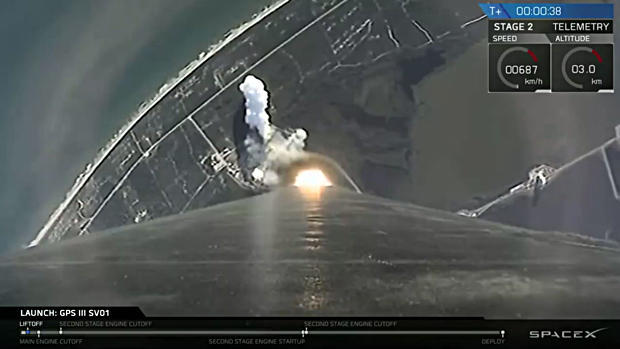 A spectacular view from a “rocketcam” mounted on the side of the Falcon 9 showing launch complex 40 and the Florida coast dropping away below. SpaceX

GPS satellites work by continuously transmitting ultra-precise timing signals from on-board atomic clocks along with data showing their exact position and velocity. With at least two dozen satellites operating in six orbital planes, at least four are above the horizon at any point on or above the Earth’s surface.

By analyzing the slight differences between incoming signals, receivers can calculate a user’s location with respect to the satellites to within about one-and-a-half feet on average and, in some cases, to within 14 inches or so. An estimated billion people around the world use satellite navigation data in some form every day.

The $529 million GPS 3 satellite is the first of 10 being built by Lockheed Martin. The company holds a second contract, valued at up to $7.2 billion, for up to 22 additional GPS 3 “Follow On” satellites providing even more accurate, more jam-proof location, timing and velocity data to all branches of the military. Lockheed Martin built 18 of the 31 satellites in the current GPS constellation.

The Air Force originally planned to launch the first GPS 3 satellite in 2014, but the program encountered a series of problems that led to multiple delays and higher costs, according to the Government Accountability Office.

A major issue has been developing the advanced software and ground systems needed to take full advantage of the GPS 3’s capabilities. As it now stands, the ground control system, known as OCX, will not be fully on line until at least 2021, after the first half dozen GPS 3 navsats are in orbit.

In the interim, Lockheed Martin has upgraded the current control system to enable test and checkout of the new satellites.

The GPS 3 navsats will provide four civilian data streams for use by countless devices ranging from smart phones to automobiles, commercial aircraft and virtually all sectors of the transportation industry. Multiple data streams will enable receivers in aircraft, for example, to compensate for atmospheric effects that might otherwise reduce accuracy.

Another advantage for civilian users is interoperability with navigation systems launched by other nations.

The new satellites also feature encrypted channels using sophisticated anti-jamming technology intended to keep the satellites operational under electronic attack. Military signals will use so-called M-code processing, “a stronger and encrypted, military-specific GPS signal which can help users operate in jamming environments,” according to the GAO. 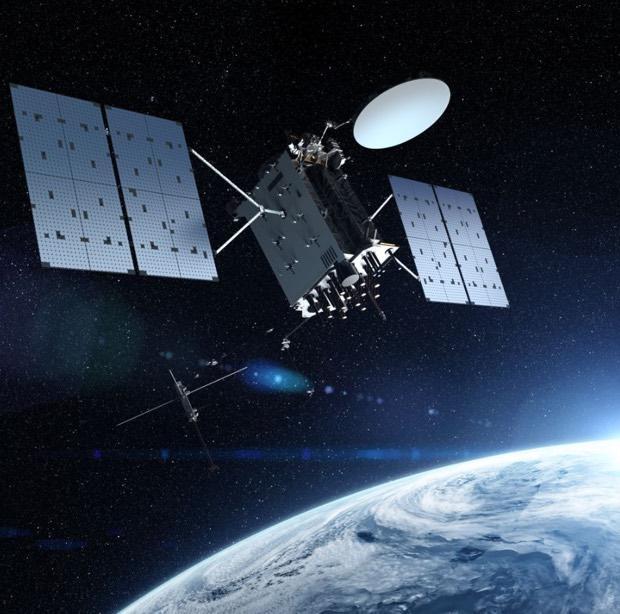 “They also broadcast a signal compatible with other global navigation satellite systems, allowing users around the globe the ability to receive and use the signals from multiple constellations, (improving) availability and accuracy of navigation signals worldwide.”

SpaceX won an initial contract to launch the first GPS 3 satellite in 2016 after demonstrating the reliability of the Falcon 9 system and meeting Air Force certification requirements for national security space missions.

Arch-rival United Launch Alliance, builder of the Atlas 5 and Delta 4 families of rockets, did not bid on that flight, but the two companies have competed head to head for multiple contracts since then.

“This launch is a milestone for many reasons,” said Col. Robert Bongiovi, director of the Launch Enterprise Systems Directorate at SMC. “For us, it marks the first competitively-awarded launch in over 10 years, the first national security space launch with SpaceX, and the first launch of a GPS 3 satellite. This really is an exciting time to be in the launch business.”