Pressing ahead after an April 20 test mishap that destroyed a Crew Dragon astronaut ferry ship, SpaceX launched a Falcon 9 rocket early Saturday that successfully boosted an unpiloted Dragon cargo capsule into orbit with nearly 5,500 pounds of equipment and supplies for the International Space Station’s crew.

In a now-familiar spectacle, the rocket’s first stage, making its first flight, flew itself back to Earth after propelling the Dragon out of the thick lower atmosphere. It put on a fiery nighttime show as it executed a picture-perfect descent to a SpaceX droneship stationed in the Atlantic Ocean about 17 miles from the launch pad.

It was SpaceX’s 39th successful booster landing and its 25th at sea.

SpaceX originally intended to bring the stage back to a landing at the Cape Canaveral Air Force Station, but the destruction of the Crew Dragon spacecraft two weeks ago left hazardous debris and other wreckage strewn across the company’s landing site, prompting mission managers to target the droneship instead.

A SpaceX Falcon 9 rocket takes off loaded with a Dragon cargo craft during a resupply mission to the International Space Station from Cape Canaveral, Florida, U.S., May 4, 2019. THOM BAUR/REUTERS

Launch was delayed 24 hours because of an electrical problem aboard the droneship Friday, but the system was repaired and the floating landing pad was returned to service in time for Saturday’s 2:48 a.m. ET launch.

In any case, a little more than a minute after the first stage settled to the deck of the “Of Course I Still Love You” droneship, the cargo Dragon was released from the Falcon 9’s second stage, kicking off a two-day rendezvous with the space station.

If all goes well, the spacecraft will catch up with its quarry Monday morning, pulling up to within about 30 feet and standing by while Canadian astronaut David Saint-Jacques, operating the lab’s robot arm, locks onto a grapple fixture.

From there, flight controllers at the Johnson Space Center in Houston will take over, remotely operating the Canadian-built space crane to pull the Dragon in for berthing at the Earth-facing port of the forward Harmony module.

Mounted inside the unpressurized trunk section of the spacecraft is a sophisticated instrument known as OCO-3, the third generation of an environmental research project known as the Orbiting Carbon Observatory. The instrument will be mounted on the station’s exterior to monitor how much heat-trapping carbon dioxide in Earth’s atmosphere.

The lion’s share of the Dragon’s science cargo will be moved inside for operation or monitoring by the station crew. 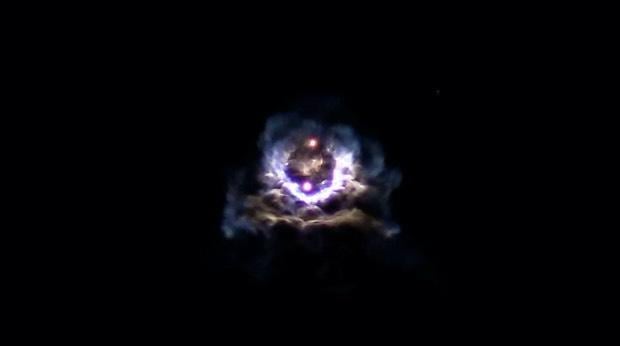 The Falcon 9’s first stage flew itself back to a pinpoint landing on an off-shore droneship, generating a cloud of flaming exhaust visible across Florida’s Space Coast as it reversed course and headed back toward Cape Canaveral. Steven Young/Spaceflight Now

One experiment, known as Hermes, will film collections of small particles that simulate the behavior of asteroid or cometary soil in the absence of gravity. The goal is to help scientists learn more about the behavior of such bodies, information that could prove useful if one ever threatens Earth and must be diverted.

A variety of biological experiments are on board the Dragon, including one to study how micro algae can be used for recycling in space and one known as “tissue chips,” sponsored in part by the National Institutes of Health. Tissue chips look like thick microscope slides, housing human tissue samples fed by blood analogues that can deliver nutrients and drugs.

“The idea is we can use these to model diseases so we can understand better disease pathologies and how disease begins,” said Lucie Low, a tissue chips investigator. “Essentially, you get a functional unit of what human tissues are like, outside of the body.

“It’s like taking a little bit of you, putting it into a pot and looking at how your cells respond to different stresses, different drugs, different genetics and using that to predict what they would do in your body.”

After the science equipment is unloaded, the astronauts will repack the Dragon with no-longer-needed equipment, broken components and trash, setting the stage for return to Earth after about a month. The Dragon is the only one of the four cargo ships currently flying to the station that is designed to bring equipment and science samples back to Earth.

SpaceX holds NASA contacts valued at $3.04 billion for 20 space station resupply flights through next year — this is No. 17 — and another contract for an unspecified amount for at least six additional flights through 2024. 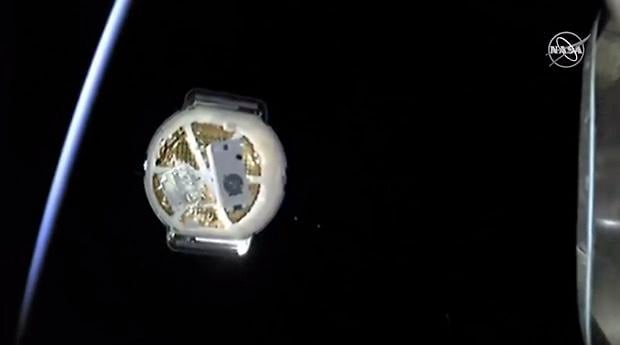 The Dragon cargo ship moves away from the Falcon 9’s second stage with the blue limb of planet Earth in the background. Visible in the open trunk section of the spacecraft is the rectangular OCO-3 instrument that will be mounted on the station to measure carbon dioxide levels in Earth’s atmosphere. NASA/SpaceX

SpaceX had hoped to launch two astronauts aboard its Crew Dragon this summer. Setting the stage for that long-awaited flight, another Crew Dragon, this one unpiloted, was launched to the space station March 2, successfully returning to Earth about five days later.

SpaceX intended to launch that same spacecraft early this summer on another unpiloted flight, this one to test the capsule’s Super Draco emergency escape rockets. But during a ground test of that system April 20 at the Cape Canaveral Air Force Station, the spacecraft apparently exploded about a half second before abort engine ignition.

The piloted flight is now on hold pending a failure investigation and corrective actions. Hans Koenigsmann, vice president of build and reliability for SpaceX, told reporters he could not estimate how long the Crew Dragon program might be grounded or even whether the astronauts would fly before the end of the year.

“I hope this is a relatively swift investigation,” he told reporters Thursday. “I don’t want to completely preclude the current schedule, (but) certainly not great news for the schedule overall.”