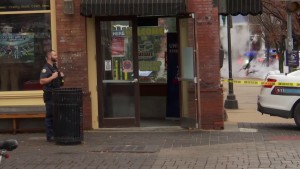 Chattanooga Police detonating a suspicious red suitcase at the corner of Market and Main Streets.

CHATTANOOGA, Tenn. (WDEF)- A festive scene on the Chattanooga Southside had a scare late Saturday Morning. Chattanooga Police responded to a call about a suspicious package shortly before the annual parade at the Main X 24 Festival at the intersection of Market and Main Streets. The suspicious package appeared to be a red bag or suitcase lying on the sidewalk.

Chattanooga Police dispatched their bomb squad to the scene which detonated the suitcase as you saw at the beginning of the video. There was a crowd of onlookers despite officers pushing people back from the explosion.

The origin of the red suitcase is unknown. CPD says there is no further threat at this time.