DALTON, Ga. (WDEF)- The Whitfield County Fire Department and the Dalton Shrine Club came together today for a great cause.

Around 50 personnel from the Whitfield County Fire Department along with Dalton Shriners stationed themselves at five locations in the Dalton area in the “Team Up for Kids” Boot Drive.

This was a very busy location at the intersection of Cleveland Highway and the North Dalton Bypass.

This is the sixth annual boot drive that is held every October.

Chris West, battalion chief for the Whitfield County Fire Department, said that “75 percent of every penny that’s collected on the streets today will go to the Shriner’s Burn Hospital in Cincinnati, Ohio take care of burned children. The other 25 percent stays local, right in our town to assist with fire safety education and to provide for a program we call “Santa in Uniform” that we do every December for underprivileged kids in our community.”

In previous drives the “Team Up for Kids” has raised around 30,000 dollars.

The Shriner’s Hospital recently celebrated its 100th anniversary in August. 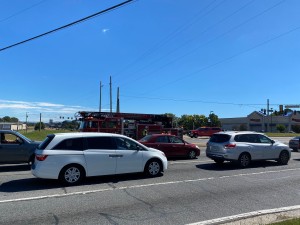 Whitfield County Firefighters and Dalton Shriners team up for the “Team Up for Kids” boot drive.