Technology can automatically land small planes when pilot is incapacitated

Two plane crashes last week, in New Jersey and Georgia, raised new questions about the safety of small planes. But new technology, currently being certified by regulators, gives pilots and passengers the option of hitting what is basically a panic button, to automatically land an aircraft.

It is an emergency Autoland feature. If something were to happen to a pilot and the button were pushed, it would get the plane safely on the ground at the nearest airport.

While crashes due to pilot incapacitation are relatively rare, they’ve killed at least 269 people in the U.S. in the last 10 years, according to the National Transportation Safety Board.

But with the Autoland feature, Ron Gunnarson of Piper Aircraft said that, even if the pilot becomes incapacitated, “people live.”

Garmin has designed new emergency Autoland technology it hopes prevents crashes like that of professional golfer Payne Stewart. His private jet lost cabin pressure, knocking out the pilots. The new Autoland system is designed to self-activate when there been a prolonged period of no pilot activity.

When activated, the Autoland feature will pick the nearest airport where it can safely land, factoring in weather, terrain, and fuel on board, radio the tower, and land the plane. CBS News

It could also prevent more common accidents – crashes like the one that killed John F. Kennedy Jr., where it’s believed he got disoriented in weather and lost control, or where the plane is dangerously low on fuel.

“That would be a situation where I hope they’d push the button and get the airplane and themselves, the passengers, down safely,” said Garmin’s test pilot Eric Sargent.  He took correspondent Kris Van Cleve up in a Piper M600 with the new system.

Van Cleve asked, “How confident are you in this system to safely land any time it’s activated?”

“Really confident,” Sargent replied. “I would put my family in here in a heartbeat, be confident if they push the button if I wasn’t around, it would get them down safely.”

Once Autoland is activated, the plane then picks the closest airport from a list of thousands worldwide where it can safely land, factoring in weather, terrain, and the amount of fuel on board. It radios the tower, declares an emergency, and updates passengers on the approaching landing.

The Autoland system can control all the flight’s functions, but the pilot can override the technology at any point.

“The plane is completely flying itself; you can see, hands off,” said Sargent. 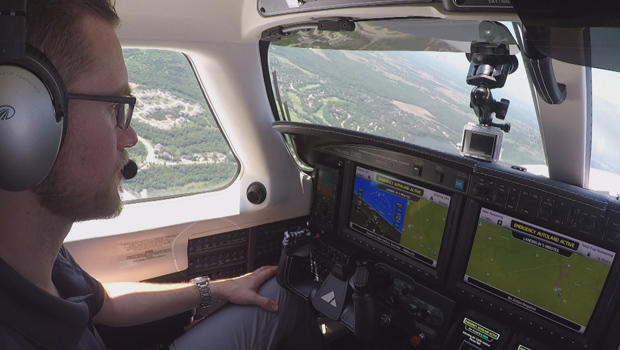 The Autoland feature can take over full flight functions if a pilot is unresponsive.  CBS News

With the runway in sight and Sargent’s hands off the controls, the Piper came in on what turned out to be a smooth, hands-free landing.

“Pretty much as good as a human pilot!” Sargent said.

It’s going to be available first in certain new Piper airplanes and it will expand to other new aircraft. The hope is that in the near future it will be able to be added to existing aircraft as well.