As the witty and bossy Diane on the hit sit-com “Black-ish,” Marsai Martin is a rising star. For a lot of child actors, fame and fortune would be enough, but it looks like Martin is after something bigger.

“I started to think about all those young little black girls that look like me [are] not really seen on TV a lot,” she said.

She says she’s out to change the industry, and taking matters into her own hands. At just 14 years old, she is the face and co-founder (with a little help from her parents) of Genius Productions in Los Angeles.

“That’s the reason why I made this production company, so everyone could feel welcome,” she said, “just to create more films for everyone that’s very diverse and inclusive.”

And Genius is just the beginning. In April “Little” will hit theatres. Martin not only acts in the film, she is one of the executive producers, making her one of the youngest in Hollywood history!

Martin said, “I thought it was shocking because I thought there were more kids doing what I’m doing, but being the first was crazy! And kind of inspiring.”

“Little” is the story of a nightmarish boss (played by Regina Hall) who wakes up in the body of her teenage self (played by Martin). 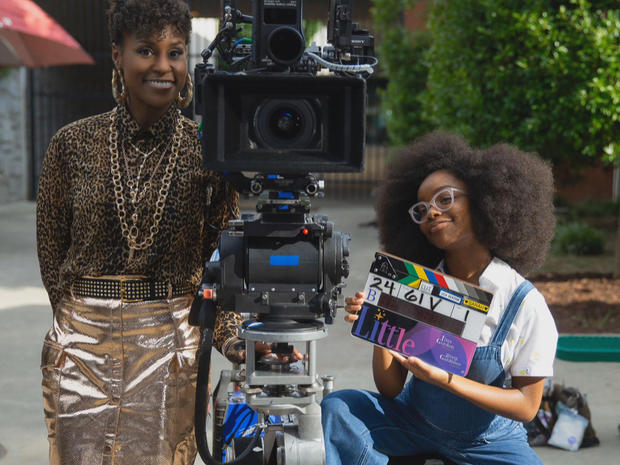 Issa Rae and Marsai Martin on the set of “Little.” Universal Pictures

And how old was she when she came up with the idea?  “I was ten.”

Martin might be young, but she’s been at it for a long time (“Basically all my life,” she says), inspired by some of the greats like Beyoncé and Ray Charles. She started off doing in commercials in her hometown of Plano, Texas, but when the family moved to Los Angeles she got her big break.

Her parents, Carol and Joshua Martin, insist that being a child star hasn’t taken the “child” out of their daughter, particularly when she’s with her little sister, Sydni.

“I think that we just kind of let her know that this is what she does, but it’s not who she is,” said Carol. “Just to keep that separation. You know, she still has chores. She gets in trouble, like every other teenager.”

“She gets in trouble?” asked correspondent Nancy Giles.

As for any other moguls in the making, Marsai Martin offers this advice: “I know everyone says it, but just believe in yourself.”

“It’s a really a big thing. ‘Cause it really all starts with you, you know? And speak your mind. And for the parents, just listen to your kids, ’cause they have, like, a different mindset. They have a whole new world that they’re looking at.”

To watch a trailer for “Little” click on the video player below.