Teen shares message for his teammates trapped in Thai cave

CHIANG RAI, Thailand — Saturday marks 15 days since a group of boys and their soccer coach became trapped by floodwaters inside a cave in Thailand. Fifteen-year-old Kongphob, who is on the same soccer team as the boys, was supposed to go to the cave that day. He went home instead, because his parents needed his motorbike, CBS News’ Ben Tracy reports.

“I feel sad and like I abandoned them and should have stopped them from going in the cave,” he told CBS News.

Kongphob’s message to his teammates? “Please come out and play soccer with me again.”

Heavy rains are expected to hit the area this weekend, which could make any sort of rescue attempt nearly impossible. Officials have been debating whether they should conduct a rescue attempt soon even though it would be incredibly risky. 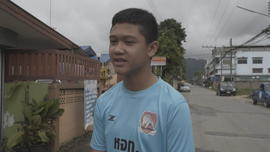 Rescuers said the boys are still too weak and need to learn more about the diving equipment they would use to escape the flooded cave system. The head of the rescue mission said they will try to wait until there is minimal risk to the boys’ lives, but the air inside the cave is now a growing concern.

Oxygen levels have dropped to an alarming 15 percent. Crews rushed to install a three-mile long oxygen tube and have delivered more oxygen tanks to the boys’ location.

They have already drained nearly 35 million gallons of water from the cave and it’s unclear how much further the water level needs to drop to allow the boys to safely escape without having to swim underwater. It would be an extremely dangerous journey that already claimed the life of a former Thai Navy SEAL who passed out underwater Friday inside the cave.

Another option to rescue the boys is drilling a hole into the mountain, but that could take weeks — or months.

The trapped soccer players wrote letters to their families, delivered out of the cave by divers. The kids write, “Mom and dad don’t worry about me. I am fine” and “We want to eat many foods and go straight home.”

In another part, a boy writes, “Teacher please don’t give us too much homework” and “I love you mom and dad. … Don’t worry we are safe.”