CHATTANOOGA, Tenn. (WDEF)- Two teens were shot in the 2400 block of Dodson Avenue on August 31st. As of Tuesday, a 17 year-old was arrested in connection to that crime. He makes the third teen, arrested this week that was involved in a crime dealing with gun violence.

According to CPD, there has been 6 shootings involving juveniles in 2020.

Below is a report of juvenile related shootings since 2018: 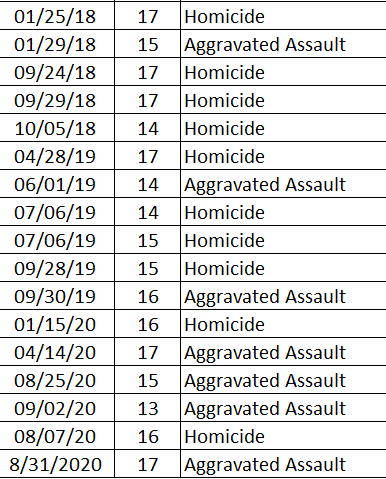 Councilman Byrd of District 8 says that the senseless violence has to stop.

“A lot of these kids are hurt and a lot of the families are hurt because they have lost lives themselves. So, when they someone that hurt them or a part of a group that hurt them, they retaliate and we have to show them how to retaliate with love and let the system take care of it and not take justice into their own hands,” adds Byrd.

Juvenile Court Judge Robert Philyaw says that most of the juveniles that he sees are one time offenders.

But, if a teen is a repeat offender then the district attorney may ask for a transfer hearing which would charge the juvenile as an adult.

Judge Philyaw says, “That’s a very serious hearing, because what the state is asking the court to consider doing is removing from that child their status as a minor for criminal responsibility.”

Both Councilman Byrd and Judge Philyaw agree that one wrong move can change the rest of your life.

“Your little problems of today could become lifelong problems if you act on them sometimes. What you do, even as a juvenile, has long term consequences,” adds Judge Philyaw.