The story of the My Pillow king

Who better to share some pillow talk with than a pillow tycoon? Martha Teichner does the honors (This story was originally aired on April 15, 2018):

Mike Lindell spends $1.5 million a week on commercials to make sure that you know about his pillow. He’s sold more than 41 million of them.

Against some pretty stiff odds, Mike Lindell, the infomercial star and former crack cocaine addict, has sold 41 million of the pillows he invented.

An incredible success, you bet … astonishing, considering the back story. “I actually had a dream, which I believe is right from God, about My Pillow,” said Lindell. “And I dreamt the logo first, actually, the name “My Pillow.'”

The dream came true. But before any of it could exist, back in 2004, Lindell, a man with life-long sleeping issues, had to invent the pillow of his dreams. “It took about a year. I kept trying different things. My youngest son would come home, we’d tear up different foams.”

Their eureka! moment came when they combined different-sized foam chunks. 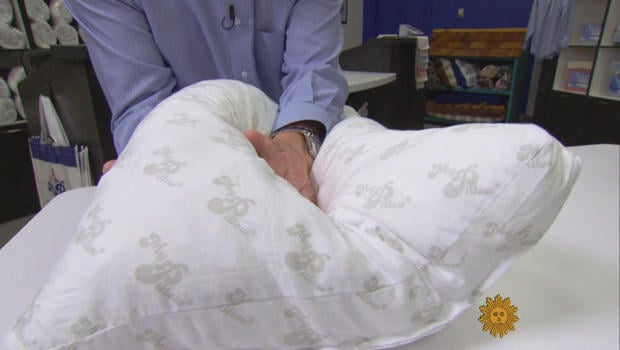 Mike Lindell puts one of his pillows to the test.

“All three sizes are in every pillow, and wherever you move it, they interlock together, and you have the most amazing adjustable pillow in history,” he said.

At first, Lindell sewed the pillows himself. The big box stores had no interest. So, back in December 2004, he set up a table at his neighborhood mall, like a lemonade stand, but with pillows.

“We sold only about 80 pillows in about a month,” he said.

“We were down to nothing, living day-by-day, and then we were losing our house, and my wife of 20 years, she left,” Lindell said.

One night in the spring of 2008, his crack dealers – yes, his dealers – staged an intervention. Lindell recalled: “One guy says, ‘Mike’s been up for 14 days. We’re shuttin’ you off, you’re not getting anything.'”

The following year he quit, cold. And it changed his life…

MyPillow-for no more sleepless nights! by My Pillow on YouTube

He has around 1,600 now, most of them working in two huge factories outside Minneapolis.

Lindell says at any one time, 20 to 30% of My Pillow’s employees are second-chancers or, like him, former addicts, among them Chelsea Friendshuh.

“I was a heroin addict for about eight years, and I was in and out of jail,” Friendshuh said. “All I did was call here and right away they said, ‘You’re hired.’ Most places won’t even give me a chance because of my background.” 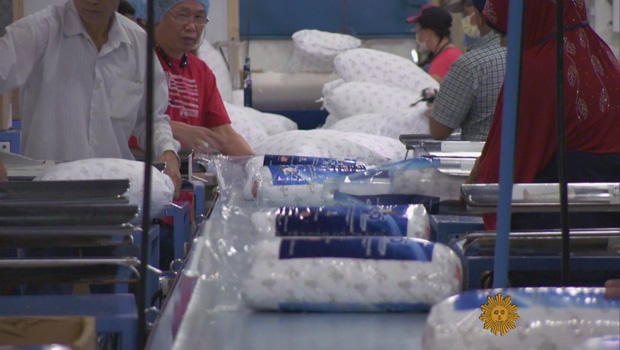 A My Pillow factory.

Lindell considers his business a vehicle for a greater calling – his success, a gift from God.

He’s proud that his pillows are made in America, and is an enthusiastic supporter of President Donald Trump. When the Better Business Bureau dropped My Pillow from an A+ rating to an F, claiming that a long-running buy-one-get-one-free offer was really a regular price, Lindell dismissed the demotion, saying he was targeted because of his political views.

“They brought the level of My Pillow fame up, up here,” he said. “So they helped me. Thank you, BBB!”

About politics, Mike Lindell is unapologetic. About pillows, he’s passionate. 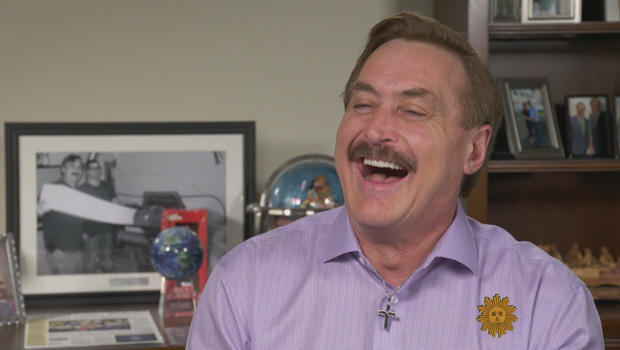 Against some pretty stiff odds, Mike Lindell, the infomercial star and former crack cocaine addict, has sold 41 million of the pillows he invented.