Collins Parker,
JASPER, Tennessee (WDEF) – More guns have been recovered and a third suspect arrested in the Mountain Mart gun theft case.
A total of 28 guns were taken during the robbery in December in Marion County.
Dustin Stephens has been charged with stealing them and Rick Adam Dickinson has been charged with re-selling many of them.
But many of the weapons are still unaccounted for.
That number got smaller after a raid on Thursday on South Pittsburg Mountain Road.
Drug Task Force Agents and Marion County deputies served a search warrant for narcotics at the home of Douglas Cole Brandon. 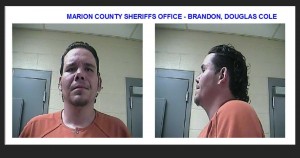 They say they had already tracked down two revolvers and a semi-auto pistol that had turned up at multiple locations around Marion and Grundy Counties.
They believe that Brandon sold each them within days of the robbery.
Authorities have also recovered the AR Rifle and AR shotgun in the photo at a separate location in Monteagle. 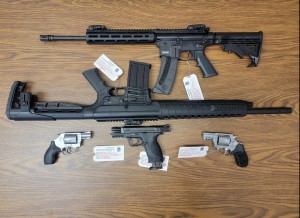 But even with these confiscations, more guns are still out there.
“Sheriff Bo Burnett would like to encourage anyone who may have innocently purchased a firearm from Rick Adam Dickinson, Dustin Stephens, or Douglas Brandon Cole to come forward and have the firearm checked by Law Enforcement to see if it is stolen.”
Categories: Crime, Featured, Grundy County, Local News, Marion County
Tags: Gun Store Burglary, Mountain Mart Gun Shop, Robbery