With three space station fliers safely back on Earth after a pinpoint landing Sunday, three fresh crew members made final preparations for launch Wednesday from Kazakhstan to boost the lab’s crew back to six.

If all goes well, Prokopyev will oversee an automated two-day rendezvous with the space station, docking at the Rassvet module around 9:07 a.m. Friday. Standing by to welcome them aboard will be Expedition 56 commander Drew Feustel, Ricky Arnold and cosmonaut Oleg Artemyev, commander of the Soyuz MS-08/54S ferry ship that carried them into orbit March 21.

In a pre-flight tradition, an Orthodox priest blesses the news media after the Soyuz MS-09 spacecraft was hauled to the launch pad at the Baikonur Cosmodrome in Kazakhstan.

Feustel, Arnold and Artemyev have had the station to themselves since early Sunday when three other crew members — Soyuz MS-07/53S commander Anton Shkaplerov, flight engineer Scott Tingle and Japanese astronaut Norishige Kanai undocked and returned to Earth to wrap up a 168-day mission.

The rapid-fire crew rotation will enable the station crew to maintain a busy research schedule amid ongoing work to prepare for an upcoming spacewalk and the arrival of two cargo ships in the next several weeks.

Prokopyev and Auñón-Chancellor are making their first spaceflight while Gerst will be making his second visit to the space station after a 165-day stay in 2014.

Auñón-Chancellor, a veteran flight surgeon, originally was assigned to a later mission, but she was moved up to the Soyuz MS-09 crew after astronaut Jeanette Epps, one of the original crew members, was unexpectedly bumped from the Prokopyev-Gerst crew in January.

Citing privacy issues, NASA provided no explanation, Epps had no public comment and Auñón-Chancellor would only say she looked forward to visiting the space station and carrying out a full slate of research.

“I certainly didn’t take part in any of those decisions, (they were) way above my head,” she said. “We know this is a dynamic business, and so they told me to prepare and train and get ready for this mission so I said OK, that’s my job, that’s what I’m going to do. And that’s what I’m focusing on.”

She said the accelerated training schedule went smoothly, crediting Gerst with helping her complete the full schedule of emergency drills. 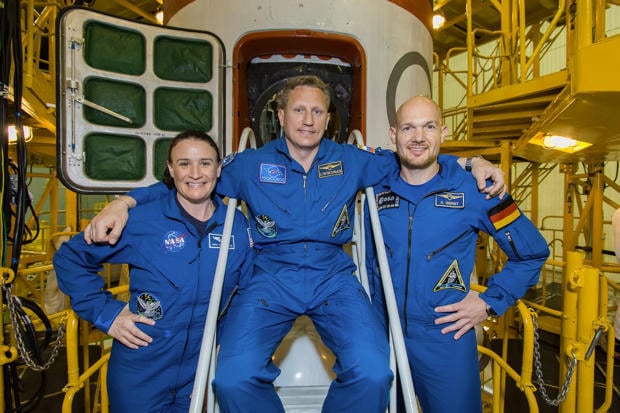 “We wanted to make sure we practiced certain emergency scenarios together as a crew and get the same number of hours that we would have otherwise,” she said. “So Alex volunteered his time in Russia to stay a little bit longer and make sure that those drills got done correctly with the right amount of time, and we weren’t rushed. But other than that, in all honesty, it really has been smooth.”

Before her selection as an astronaut in 2009, Auñón-Chancellor spent more than nine months in Star City near Moscow supporting medical operations with space station crew members and participated in water survival training in Ukraine.

After joining the astronaut corps, she pent two months in Antarctica searching for meteorites as part of a scientific expedition and later served as an aquanaut aboard the Aquarius underwater laboratory. She said her time in Antarctica was particularly valuable.

“Antarctica was fantastic because when I was there I felt like I was not on this planet,” she said. “You really feel like you are more isolated in Antarctica than you are on space station. On space station, you can call your family, you can get news uploaded to you, you’re very well connected. And down there in Antarctica, you don’t feel connected to anything. You learn what’s important to you.”