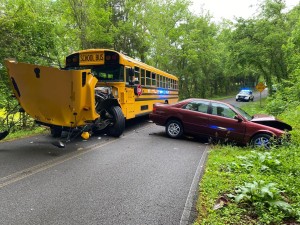 The Tennessee Highway Patrol says there were 34 children on the bus at the time.  They say a juvenile was driving the car.  It crossed the center line in a curve.

CLEVELAND, Tennessee (WDEF) – Three students were taken to the hospital after a school bus crash this morning in Cleveland.

It happened on Holloway Road around 7:30.

The bus was loaded with students arriving at Lake Forest Middle School.

Sheriff’s officers say a car crossed the center line and hit the bus head on.

One student in the car and two on the bus were transported to the hospital with minor injuries.