MONTGOMERY, Ala. (AP) — A jury was selected Monday in the defamation lawsuit filed by a woman who had accused failed U.S. Senate candidate Roy Moore of molesting her when she was 14. 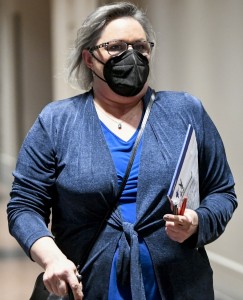 Leigh Corfman, who accused former Alabama Chief Justice Roy Moore of sexual assault, walks into the courtroom in the Montgomery County Courthouse in Montgomery, Ala., on Monday, Jan. 24, 2022, during jury selection, as the trial for Corfman and Moore’s defamation lawsuits against each other begins. (Mickey Welsh/The Montgomery Advertiser via AP)

Leigh Corfman said Moore defamed her and made false statements as he denied her accusations during the 2017 U.S. Senate race in Alabama. The sexual misconduct allegations helped derail Moore’s hopes of winning the election.

Moore, a Republican, lost the 2017 race to Doug Jones, the first Alabama Democrat elected to the U.S. Senate in 25 years. Jones was defeated in the next election by Republican Tommy Tuberville.

A jury of seven men and five women — plus four alternates -— was seated Monday. Opening arguments are expected Tuesday.

Corfman said she was a teen when Moore, then a 32-year-old assistant district attorney, touched her sexually during a 1979 encounter. Corfman was one of several women who said Moore pursued them when they were teens and he was adult.

Moore has denied the accusations and countersued Corfman and other accusers for defamation.

Her attorney Neil Roman, said Monday that Corfman “is excited that after four years of waiting, she finally gets to make her case to a jury of her peers.”

“By this lawsuit, I seek to do what I could not do as a 14-year-old — hold Mr. Moore and those who enable him accountable,” Corfman said in a 2018 statement when the lawsuit was filed.

Moore has denied Corfman’s accusations. His lawyers maintain that he only defended himself against the accusations.

“We just want the truth to prevail,” Moore told reporters as he left the courtroom. His attorney, Julian McPhillips, called the case an extension of Corfman “hungering for the limelight.”

Corfman and Moore sat with their attorneys as their respective lawyers questioned potential jurors about the case, including about their views on Moore.

Corfman’s attorney asked if any had donated to the legal group that Moore founded. Moore’s attorneys asked potential jurors about their views on gay marriage, the public display of the Ten Commandments.

Moore was twice removed as Alabama’s chief justice for defying, or urging defiance, of court orders regarding same-sex marriage and the public display of the Ten Commandments in a state court building.

Both lawyers for Corfman and Moore said they were pleased with the selected jury. McPhillips said Corfman’s attorneys used their strikes to remove white panelists, leaving an almost entirely Black jury to hear the case against Moore, who is white.

Corfman had also sued Moore’s campaign, but a judge dismissed that defamation claim.

Corfman and her mother have said that Moore first approached her as she waited outside a custody hearing at the Etowah County courthouse. Corfman said she later arranged to meet Moore and he took her to his home, where he initiated the encounter. Corfman said he took off her shirt and pants and removed his clothes except for his underwear before touching her over her bra and underpants.

Corfman’s accusation was first reported by The Washington Post.

Man charged with making false report against officer from jail