President Donald Trump’s tariffs are causing more pain for middle- and low-income households than for wealthy ones, a recent analysis from the right-leaning Tax Foundation found. Tariffs already imposed, like those on Chinese goods, may cut income by $146 for each of the middle- and low-income households, according to the analysis. If all of Mr. Trump’s threatened tariffs are ultimately imposed, those households would lose $453.

That may not sound like much, but consider: $148 is roughly the weekly cost of food for a “thrifty” family of four, according to the most recent estimates from the U.S. Department of Agriculture.

The Tax Foundation looked at the impact of tariffs by household income. For the lower and middle groups, tariffs cut their after-tax income the most, at 0.33 percent, compared to 0.23 percent at the highest income level. That’s because most middle-income families buy more of what economists call consumables — clothes, food and even autos — that are subject to Mr. Trump’s tariffs than their wealthy counterparts, the analysis found.

“Those lower-income households are spending a larger share of their income on consumption,” Tax Foundation analyst Erica York said in an interview. 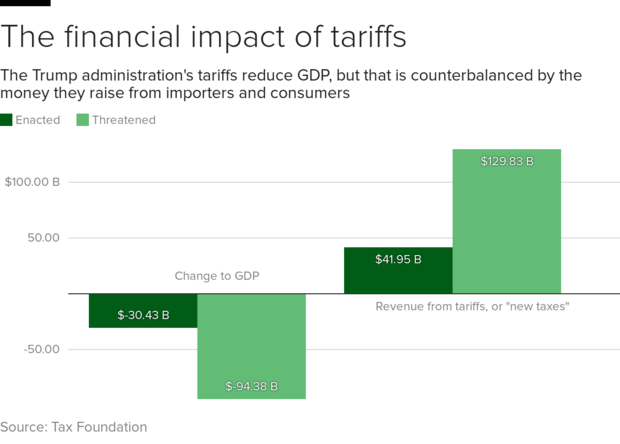 Tariffs may also be holding back wages, cutting into GDP and costing jobs, according to the analysis.

The Trump administration last month agreed to delay expanding tariffs on Chinese goods or imposing even more while the U.S. and China negotiate trade differences. The two sides haven’t yet come to a broad agreement.

And the rewrite of trade rules between the U.S., Mexico and Canada must now pass all three countries’ legislative branches to take effect. Just this week, the Department of Agriculture released more subsidies for farmers hit by tariffs Beijing imposed in response to Mr. Trump’s tariffs on Chinese goods.

The tariffs may also be holding back the economic boost from tax cuts passed into law at the end of last year, a separate Tax Foundation analysis found. The think tank’s model shows that newly implemented tariffs will slow GDP by 0.12 percent and cost the U.S. economy 94,000 jobs.

Tariffs may also have reduced the number of jobs that the new tax law was intended to generate, they wrote. The U.S. economy added 155,000 new jobs in November. “Would that have been higher without the tariffs or lower without tax reform?” the researchers wrote “Sadly, this is quite difficult to say with a definite answer.”