One of the blazes, the Hillside Fire in San Bernardino, east of Los Angeles, prompted mandatory evacuations and destroyed at least six homes. The 46 Fire in neighboring Riverside County has burned at least five buildings.

CBS Los Angeles reports the 46 Fire started in the same area where a car chase ended in a crash, police said, although authorities couldn’t immediately confirm if the chase sparked the fire.

Crews faced a major battle Wednesday in Simi Valley, northwest of Los Angeles, as they took on another blaze: the Easy Fire. The flames came dangerously close to the Ronald Reagan Presidential Library and nearby neighborhoods.

About 30,000 people were forced to evacuate.

A red flag warning for the region has ended, and the winds have subsided “quite a bit,” according to a representative from the National Weather Service. Temperatures are expected to plunge to the high 20s overnight.

Easy Fire scorches over 1,700 acres: “We still are not through this”

“We still are not through this,” Lorenzen said. “We have a good ‘nother 24 hours of significant weather conditions and a lot of threats.”

It’s not yet clear what caused the blaze. Officials said they hoped to hold a perimeter Wednesday night, and continue containing the fire on Thursday morning.

Fire officials announced Wednesday they identified PG&E equipment as the cause of two fires in eastern Contra Costa County over the weekend, which led to a number of evacuations in Northern California.

The East Contra Costa Fire Protection District said firefighters sent to a vegetation fire in Bethel Island early Sunday found a rapidly expanding, wind-driven fire that had burned an area the size of a football field.

Fire investigators determined the area of origin was under PG&E power lines, obtaining video that showed a transformer casting sparks onto the vegetation below, the fire district said. The fire forced evacuations from a nearby mobile home park.

As the fire was being brought under control, a second fire was reported about 2.5 miles away in Oakley. The fire district said the reporting party indicated another PG&E equipment malfunction, and investigators confirmed a transformer failure which showered sparks and ignited vegetation.

PG&E said Wednesday it didn’t have enough information to officially comment on those two fires and said “it’s too soon to tell” if its equipment was to blame.

About a dozen wildfires were burning throughout California as of Wednesday. 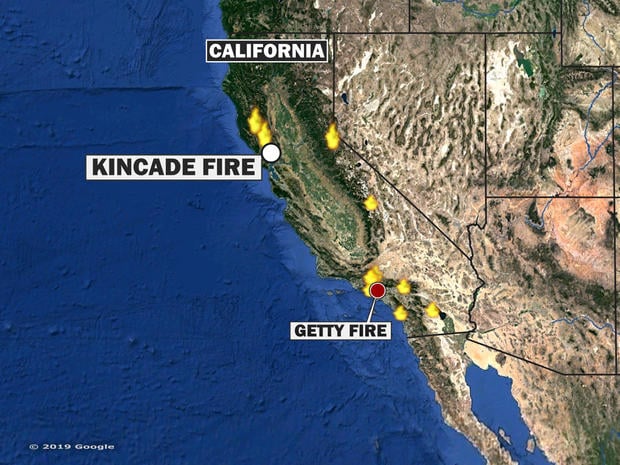 “This will only get worse in the future”

A recent study published in Earth’s Future suggests that the increasing size of wildfires occurring across California in the last 50 years is attributable to climate change drying out the landscape.

“Since the early 1970s, California’s annual wildfire extent increased fivefold, punctuated by extremely large and destructive wildfires in 2017 and 2018,” the researchers wrote. “This trend was mainly due to an eightfold increase in summertime forest-fire area and was very likely driven by drying of fuels promoted by human-induced warming.”

Over the past decade, average temperatures there have risen over 2 degrees Fahrenheit, but the moisture deficit — the difference between the amount of water actually in the atmosphere and the amount of water it can hold — has not caught up. Lower relative humidity causes brush to dry out faster, creating more kindling to burn when a fire starts.

“It’s not likely to get better as we continue to warm the climate,” CBS News climate and weather contributor Jeff Berardelli said. “This will only get worse in the future.”