DALTON, Ga. (WDEF)- The Georgia State Patrol says that 19-year-old Kathryn Beasley succumbed to her injuries last night. GSP is still investigating the crash. We will keep you updated as we learn more.

DALTON, Ga. (WDEF)- The Georgia State Patrol says that two teens were killed in a fatal accident near Haig Mill Lake Road. GSP says that the accident happened around 9 p.m. Friday night when a Ford Fusion left its lane and hit a Dodge Ram head on. The Dodge Ram rotated clockwise and hit a Ford Taurus. 19-year-old Kierra Clay and 18-year-old Bethany Rose Pizarro were passengers in the Ford Fusion and suffered fatal injuries. The driver of the Ford Fusion, 19-year-old Kathryn Beasley, was airlifted to Erlanger. Officials say that she is in critical condition. The other two drivers suffered non-life-threatening injuries. Georgia State Patrol says that they are still investigating the crash. We will keep you updated as we learn more. 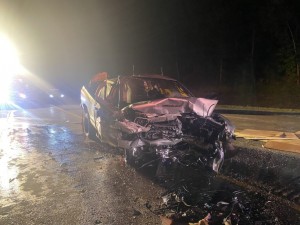