The scene in Denver where an Uber driver allegedly shot and killed a passenger June 1, 2018

Uber is responding after Denver police said an Uber driver shot and killed his passenger Friday. Police said the driver, 29-year-old Michael Hancock, shot his passenger numerous times. According to a police statement, a detective “located 10 spent 40 caliber cartridges,” and the victim was “lying in the floorboard of the front passenger seat.”

Police said it appears Hancock got into a dispute with his passenger, who has not been identified. 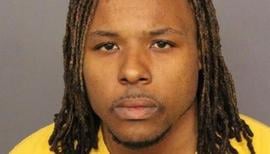 “There appears to be a conflict between an Uber driver and his passenger,” said Sonny Jackson, a police spokesperson. “The passenger did suffer gunshot wound or wounds and was transported to the hospital where subsequently he was pronounced dead a short time later.”

Hackcok had a semi-automatic weapon on him even though Uber’s official policy prohibits drivers and riders from carrying firearms of any kind in a vehicle while using the app.

In a statement, Uber told CBS News: “We are all deeply troubled by the events in Denver today. Our thoughts are with the families of those involved.”

Uber has previously been criticized for not conducting thorough background checks of its drivers. The Colorado Public Utilities Commission fined Uber $8.9 million after regulators found 57 drivers had felony convictions, major moving violations, and had suspended, revoked or cancelled driver’s licenses. Hancock, however, had no previous criminal record.

The shooting comes in the midst of Uber trying to rebrand its image, after a series of setbacks, including an Arizona woman killed earlier this year by an Uber self-driving car and complaints of widespread sexual harassment within the company. Last month, Uber CEO Dara Khosrowshahi addressed the issue on “CBS This Morning.”

“What happened in the past was deeply unpleasant and wrong but the company from a bottoms up standpoint started changing and I think it continues apace,” said Khosrowshahi.