Fire is under control, but power repairs could take awhile

11:15 Update: Fire Dept. handing over scene to EPB crews to make repairs overnight.  Here is their description of the incident. 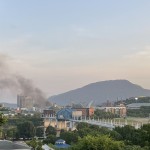 Firefighters were called to the 200 block of Broad Street at 8:17 PM Tuesday. Flames and sparks were coming out of the ground through grates. Because it was electrical in nature, firefighters used several dry chemical extinguishers to suppress the fire until the power was cut to the transformers. Once power was cut, more dry chemical extinguishers were used to fully extinguish the fire. Then water was used to cool everything down so that EPB could assess the damage. As a result of this incident, power has been cut to a significant area around where this occurred. There’s no other damage or injuries at this time.

The lights are back on at the Walnut Street Bridge, but no time table for when all the power (and air-conditioning) will be back.

UPDATE: Officials at the Tennessee Aquarium say there were no power outages at either the main building or the IMAX Theater.

CHATTANOOGA (WDEF) – Witnesses tell us they saw a manhole corner by the Ben and Jerry’s next to the Aquarium shoot into the air, followed by thick smoke.

The fire is out, and so is the power.

Fire officials say the outage has grown to a larger section of the area… basically from Memorial Auditorium to 601 Walnut, the Aquarium, including Market, Broad and Chestnut streets.

EPB crews are on the scene.

But they are having to wait on the transformer to cool off before they can make repairs.

So many Riverfront diners and riverfront tourists are facing the night without air-conditioning.