CHATTANOOGA, Tenn. (WDEF) – In a post on Twitter, Kalani Porto described alleged situations of racism with the UTC fraternity Sigma Chi, including a claim that while pledging, the fraternity made him continuously say ‘the only reason I’m here is affirmative action.’ 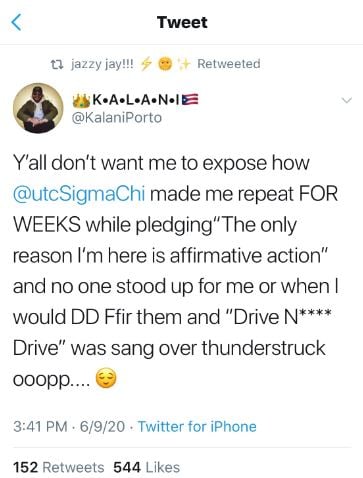 In response to the post Porto made the following statement:

I AM NOT A VICTIM.

I said what I said to show that these incidences happen in a vacuum. A system which encourages or even less does not correct problems when they happened. These moments don’t define you but they stick, they cause you to questions your existence and your value. I became depressed and detached and tried to adjust my life in order to fit into a culture because mine wasn’t embraced or accepted. It’s not a name or a person it’s the organization/system surrounding ALL Greek life specifically IFC fraternities.

To say the organization never did anything for me would be a BOLD FACE LIE but that’s NOT THE POINT.

The NFL has made more BLACK millionaires than any American corporation, but tell me where Roger Goodell’s stands today on Colin Kaepernick.

All that said words are appreciated and heard but yes if there is/was a person of color and specifically a black person in most organization there have been/will be instances similar to mine.

UTC officials said on social media that said they were notified on Tuesday “that an affiliated fraternity may have participated in racially insensitive activities.”

They are investigating the allegations and said “racism has no place on our campus.”

News 12 reached out for further comment, but have not heard back. 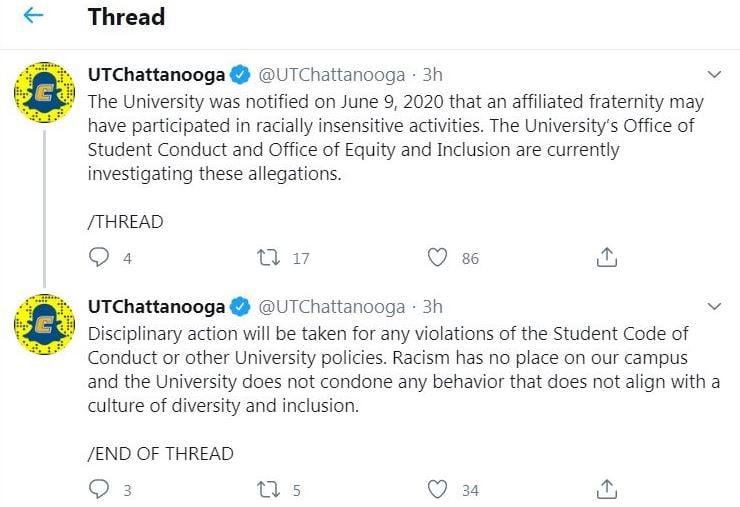 We also reached out to Sigma Chi for a statement.

“Sigma Chi International Fraternity has received notice that former members of our chapter located at the University of Tennessee-Chattanooga are alleged to have participated in racially insensitive activities. We are fully cooperating and partnering with the university which has launched an investigation through its Office of Student Conduct and Office of Equity and Inclusion. Racism has no place in our fraternity and we will hold any member who is found to have violated any of our policies, specifically our statement of policy on human decency and dignity, appropriately accountable.”