Wildfires rage in California as residents scramble without power

California faces a critical fire danger Thursday morning, as at least a half dozen wildfires burn across the state. Forecasters say high winds and low humidity are only increasing the risk.

Swaying trees and power lines would increase the wildfire threat — if the power wasn’t already cut. But on Wednesday, the weather conditions prompted the state’s largest power utility, PG&E, to preemptively shut off electricity to more than 700,000 customers.

Ron Blasingame, a resident who’s trying to cope with the blackout, said he’s regretting not buying a generator.

Blasingame said PG&E hasn’t been doing its job to keep its infrastructure safe. “They haven’t cleared the brush from their lines, but they want to pay dividends and give their executives money,” he said. “It’s a public utility — we’re paying for that.”

“Do your job,” Blasingame said. “Protect the public.”

Many residents waited in long lines to fill their gas tanks, before the pumps lost electricity and shut down. 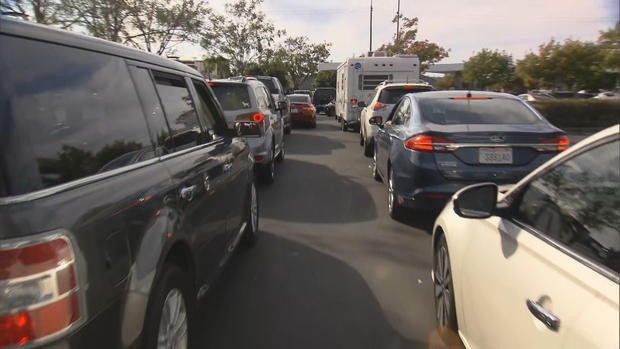 Barry Friedman’s home improvement store lost power, but he managed to keep it open by guiding customers by flashlight to purchase goods.

“There’s a lot of people coming in here,” Vigliotti said. “Is it fair to say some of them were caught off guard by this?”

“Oh for sure…” Friedman responded. “Unfortunately, we’ve run out of some of those products that they need.”

Debbie Medina relies on her CPAP machine and oxygen generators to stay alive, and her condition prevents her from getting to community centers. “What are you going to do with people like myself?” she asked. “Because I know I’m not the only one.”

Fixing this problem will cost a lot of money: PG&E said putting existing overhead lines in fire threat areas underground could cost as much as $110 billion.