Harare, Zimbabwe — Zimbabwe’s president on Tuesday said violence by security forces was “unacceptable and a betrayal” and will be investigated after a week of economic crisis and crackdown in which activists said a dozen people were killed.

President Emmerson Mnangagwa called for a “national dialogue” among political parties and civic leaders, even as arrests continued. He spoke after skipping a visit to the World Economic Forum in Davos, Switzerland to return home.

Zimbabwe’s military is in the streets for the first time since post-election violence in August killed six people. This time, people report being hunted down in their homes by security forces and severely beaten. Doctors treated dozens of gunshot wounds. More than 600 people were arrested, most denied bail.

Mnangagwa said insubordination will not be tolerated and “if required, heads will roll.”

He defended, however, the dramatic fuel price increase that began the unrest by making gasoline in Zimbabwe the most world’s expensive. Authorities said it was aimed at easing the demand that created miles-long lines as gas stations, with some families sleeping in their cars.

But Zimbabweans who had seen no improvement in the collapsed economy under Mnangagwa, who took office in 2017 after the ouster of longtime leader Robert Mugabe, lost their patience. Activists and labor leaders called for people to stay at home in protest. Others took to the streets, some looting in anger or desperation. 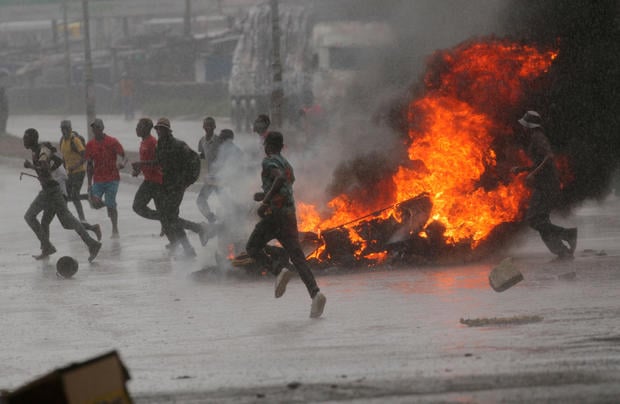 People run at a protest as barricades burn during rainfall in Harare, Zimbabwe, Jan. 14, 2019. REUTERS

Mnangagwa’s government has blamed the opposition, despite witness accounts of security forces opening fire on crowds and killing or wounding bystanders, including a 17-year-old.

“Everyone has the right to protest, but this was not a peaceful protest,” Mnangagwa said, noting “wanton violence and cynical destruction.”

The government-backed Zimbabwe Human Rights Commission laid the blame on security forces, saying eight people were killed and criticizing the use of the military and live ammunition. It said the government had not learned its lesson from the August crackdown, and it should compensate “victims of military and police brutality.”

Mnangagwa has previously said he is open to dialogue with the main opposition MDC party, which narrowly lost both the July election and a court challenge alleging fraud. The president has dismissed the idea of a government of national unity, and officials have said the opposition was trying to force talks by stirring up unrest.

The opposition called Mnangagwa’s call for dialogue a “gimmick to buy time.”

“Mnangagwa’s overtures are always on Twitter. He knows where we are, yet he has chosen not to talk to us directly,” MDC spokesman Jacob Mafume said. “Why are soldiers still beating up people and the police arresting people if he is sincere?”

MDC leader Nelson Chamisa said his overtures at dialogue had been “spurned and mocked” and that people must be free to talk without fear. 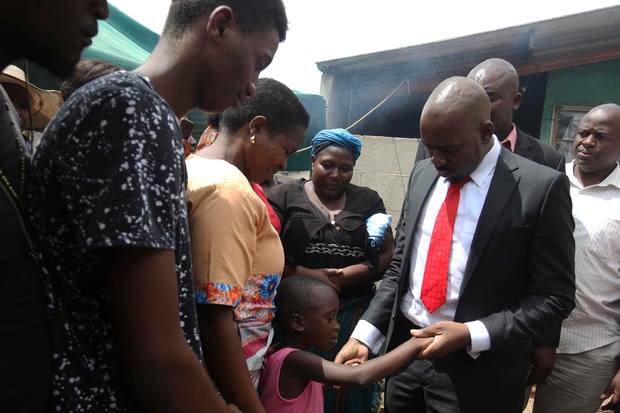 Zimbabwe opposition leader Nelson Chamisa, foreground right, reacts with family members during the funeral of Kelvin Tinashe Choto, in Chitungwiza, southeast of the capital, Harare, Zimbabwe, Jan, 19, 2019. Before the family of Choto knew he had been killed, social media in Zimbabwe was circulating a photo of his battered body lying on the reception counter of a local police station. Angry protesters had left him there. The 22-year-old was shot in the head, one of at least a dozen people killed in a violent crackdown by security. AP

Arrests continued. Zimbabwe Lawyers for Human Rights said police detained labor federation leader Japhet Moyo “in the wee hours of the night” just hours after releasing him. He is charged with subversion for his role in organizing the national strike along with pastor and activist Evan Mawarire.

Spokesman Kumbirai Mafunda told The Associated Press that lawyers will go to court to press for them to be allowed to resume treatment.

Zimbabwe’s government ordered an internet blackout in recent days as reports of abuses emerged, but the High Court on Monday ordered that full service be restored, saying only the president has the authority to order it. The government alleges the internet was used to organize unrest.

At Davos, Mnangagwa had planned to appeal for foreign investment and loans but faced a more difficult reception than a year ago, when optimism was relatively high about a “new Zimbabwe.” Indicating the severity of the economic crisis, neighboring South Africa recently turned down Mnangagwa’s request for a $1.2 billion loan.

South Africa is now considering a bailout for Zimbabwe “as long as it is affordable for our side,” Foreign Minister Lindiwe Sisulu said.

Zimbabwe’s turmoil again brought questions about tensions between Mnangagwa and the man he had left in charge, hard-line former military commander and Vice President Constantino Chiwenga, who led the military effort to oust Mugabe.

Mnangagwa and Chiwenga have dismissed reports of a rift, and they hugged upon the president’s return late Monday, chatting for 15 minutes on the runway.

“This is state-sponsored violence,” Dewa Mavhinga, the southern African director for Human Rights Watch, told reporters in South Africa on Tuesday. “Mnangagwa should not pretend that the misconduct is unacceptable to his government when they are taking no action.”