Zion Williamson thanks Nike for making him stronger shoes

Duke University’s Zion Williamson is finally back on the court following a month-long injury spurred by a burst Nike shoe. Williamson and coach Mike Krzyzewski shared some insights into the making of Williamson’s new shoes during a post-game press conference Thursday.

Williamson was famously knocked to the ground with a knee sprain after his Nike shoe blew out less than a minute into the game against arch-rival North Carolina Feb. 20. Nike said in a statement that it was “concerned” and was “working to identify the issue.”

The freshman sensation made his return wearing a modified version of Kyrie Irving’s 4 model Nikes, rather than the Paul George’s 2.5 model that failed him the last time. He was, of course, asked many times about the shoes by reporters after the game.

“The shoes were incredible in this game,” Williamson told reporters after Duke beat Syracuse 84-72 in the ACC tournament. Williamson scored a whopping 29 points to lead the team to victory.

The custom white and blue Nikes he wore for his return feature Duke’s logo on the back. They were designed to be stronger and more supportive for the 6’7″, 284-pound star. Reporters asked Williamson if they’d gotten any special modifications.

“I couldn’t really specifically tell you if I wanted to,” Williamson said. “I just know they’re a little stronger than the regular Kyrie 4’s, so I want to thank Nike for making these, but, yeah, they felt very comfortable.”

Krzyzewski explained some of the efforts Nike put into making the new shoes.

“Right after the event, they sent their top people out here to figure out what went wrong, the next day,” he said. “And then those people went to China to actually look at the making of a shoe that would be very supportive. And then they came back within a week with different alternatives to make sure that it was done right.” He also explained that Williamson had worn his other pair of shoes too many times, and he has now been advised to change them more frequently. 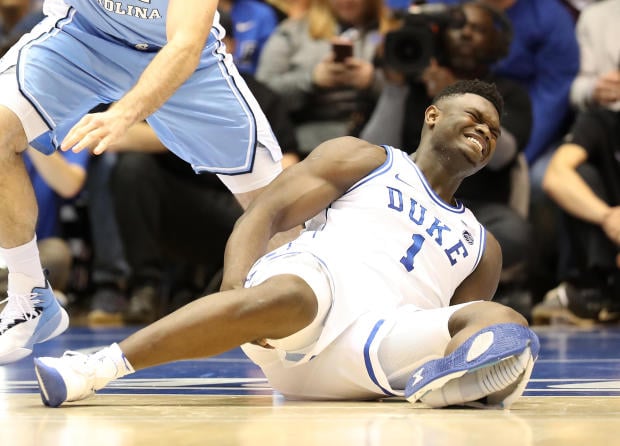 Zion Williamson of the Duke Blue Devils falls as his shoe breaks apart during a game against the North Carolina Tar Heels on Feb. 20, 2019 in Durham, North Carolina. Getty

Williamson said he made the decision to return just a few days before the game against Syracuse. “There was never any pressure for me to rush back when I wasn’t ready,” he said.

Duke is four years into a 12-year deal with Nike as the exclusive supplier of uniforms, shoes and apparel. Soon after Williamson’s basketball shoe ripped apart, Nike’s stock price took a billion-dollar hit, though its value has since recovered.

“We have a long-standing relationship with Nike and their team consistently works with Duke Basketball to ensure our players are wearing the proper products,” Deputy Director of Athletics Jon Jackson told CBS News.

“We have a very close relationship with them,” Krzyzewski said. “We think it’s the best shoe, or else we wouldn’t be with them.”