Sao Paulo — A mining dam collapsed in southeastern Brazil on Friday, inundating a nearby community in an enormous swath of reddish brown liquid waste and leaving an estimated 200 missing, according to Minas Gerais state firefighters. The regional governor’s office said seven bodies have been recovered so far.

Brazilian mining company Vale SA said earlier in a statement that the flow reached the community of Vila Ferteco and an administrative office, where employees were present.

The company said it didn’t have further information on deaths or injuries at the dam, located in the town of Brumadinho. Parts of the city were evacuated and local firefighters were rescuing people by helicopter and ground vehicles.

Residents are seen in an area next to a dam owned by Brazilian miner Vale SA that burst, in Brumadinho, Brazil January 25, 2019. WASHINGTON ALVES / REUTERS

There were no official reports of deaths, but the state fire department press department told The Associated Press that about 200 people were estimated to be missing.

According to BBC News, the mayor of Brumadinho, Avimar de Melo, told local newspaper Hoje em Dia that “at least 50 people” had been killed. “We do not have more details because everything is happening very fast,” he said. 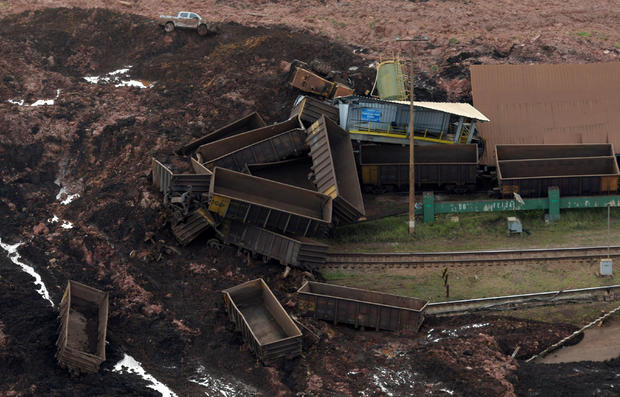 General view from above of a dam owned by Brazilian miner Vale SA that burst, in Brumadinho, Brazil January 25, 2019. WASHINGTON ALVES / REUTERS

Vale CEO Fabio Schartzman said he did not know what caused the collapse. About 300 employees were working when it happened. About 100 had been accounted for, and rescue efforts were under way to determine what had happened to the others.

“The principal victims were our own workers,” Schartzman told a news conference Friday evening. He said a restaurant was buried by the mud at lunchtime.

Local television channel TV Record showed a firefighters’ helicopter hovering inches off the ground as it pulled people covered in mud out of the sludge.

Photos showed the rooftops of structures poking above an extensive field of the mud, which also cut off roads.

President Jair Bolsonaro sent a tweet saying he lamented the incident and was sending the three cabinet ministers to the area.

Another dam administered by Vale and Australian mining company BHP Billiton collapsed in Mariana, Minas Gerais, in 2015, resulting in 19 deaths and dislocating hundreds from their homes. It’s considered the worst environmental disaster in Brazilian history, with 60 million cubic meters of waste flooding rivers and eventually reaching the Atlantic Ocean.

The rivers of mining waste are raising fears of widespread contamination. According to Vale’s website, tailings are mostly made up of sand and are non-toxic. However, a UN report found that the waste from the 2015 disaster “contained high levels of toxic heavy metals.” The 2015 collapse left 250,000 people without drinking water and killed thousands of fish.