Adams and Wamp Clash Over Accusations of Meddling Texts to Voters 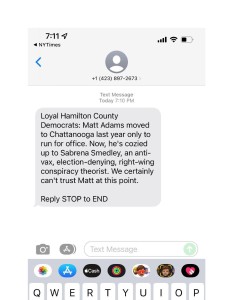 One of the texts that Matt Adams is accusing the Weston Wamp campaign of sending. Involves attacks on Adams and Sabrena Smedley. (Courtesy: Matt Adams)

CHATTANOOGA, Tenn. (WDEF)- Today is election day in Tennessee and the gloves have come off in the Hamilton County Mayoral Race between Democratic candidate Matt Adams and Republican candidate Weston Wamp.

The latest incident between the two candidates began with a press release from the Adams campaign which accused the Wamp campaign of sending multiple texts to Hamilton County voters trying to destroy his reputation by targeting Democratic voters.

The following is the press release from the Adams campaign:

“I have seen several people post screenshots of a text to ‘loyal Hamilton County Democrats’. This message is not coming from the Democratic party at any level. It is merely a last ditch effort to sway voters to a candidate who has no respect for Republicans or Democrats. My opponent, Weston Wamp, consistently thinks he is the smartest person in the room, and believes that a cheap 9th inning trick will win him the respect and votes of the residents of this great county. This list of folks receiving this text is the same one that he used 3 months ago to beg Democrats to vote in the Republican primary. I know and understand that the voters of this county are smart enough to see through his tricks.”

One of the texts reads the following, which includes attacks on Adams recently moving to Chattanooga to run for mayor and former Republican candidate for Hamilton County Mayor Sabrena Smedley’s potential alliance with Adams if he were to win today’s election. Here is what that text reads:

The Adams campaign claims that the same voters who allegedly received this text also received a text before the May 3 Republican Primary to encourage voters to participate in the Republican primary. Notably, Smedley had contested the results of the primary by accusing many Democrats  of cross voting which she claimed affected the results of the election. That contest was rejected at a state hearing in Nashville certifying the win for Wamp. That text reads: 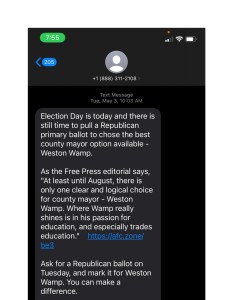 The alleged text that the Adams campaign claims Wamp sent before the May 3 Republican Primary. (Courtesy: Matt Adams)

“Election Day is today and there is still time to pull a Republican primary ballot to choose the best county mayor option available- Weston Wamp. As the Free Press editorial says, “At least until August, there is only clear and logical choice for county mayor- Weston Wamp. Where Wamp really shines is in his passion for education, and especially trades education.” Ask for a Republican ballot on Tuesday, and mark it for Weston Wamp. You can make a difference.”

News 12 reached out to the Wamp campaign for a response to these allegations from the Adams campaign. Publicist Lundy Davis for the Weston Wamp campaign sent us a statement this morning about the mindset of the campaign on Election Day.

“While Weston was putting his children to bed on the eve of the election, his opponent was still sending desperate campaign press releases.  It’s time for a new generation of leadership in Hamilton County, and Weston and Shelby look forward to starting that chapter Thursday night.”

Polls open up this morning at 8 AM EST and close tonight at 8 PM EST. Stay tuned to News 12 for all of the election results this evening and overnight as Tennessee voters make big decisions at the polls.