The son of a socially prominent watchmaker, Du Pont and his brother fled to America during the French Revolution. 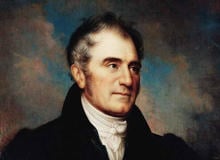 During the French Revolution, Eleuthère Iré́née du Pont (1771-1834) emigrated to the United States, where he set up a gunpowder factory – a forerunner of the DuPont chemical company.

In 1802 he set up a gunpowder factory on the banks of the Brandywine River near Wilmington, Delaware, creating a business that helped arm the U.S. military during the War of 1812, and other wars that followed.

Over time, the DuPont company expanded from munitions to chemicals and consumer products of all kinds, from Cellophane, Rayon and Teflon, to Freon and Kevlar, as an 1936 corporate film, “The Wonder World of Chemistry,” explains:

“Every year DuPont buys from the farm, from the mine and the forest, vast quantities of materials to be converted by industry into products that provide better things for better living!”

Perhaps the best known of all the products DuPont has made are nylon stockings – first put on sale in 1940, with eager buyers lined up around the block.

Stockings made from the newly-introduced synthetic Nylon go on sale in 1940.

After more than two centuries as an independent company, DuPont merged with Dow Chemical last year, but only briefly.

By the middle of next year DowDuPont plans to un-merge by splitting into three separate companies, each specializing in a different line of products: agriculture, materials science, and specialty products.

Whatever would that long-ago founding du Pont make of that?