Country star Brad Paisley grabbed his cowboy hat-shaped construction helmet and broke ground on a new nonprofit store on Wednesday. Paisley and his wife, actress Kimberly Williams-Paisley, are opening a free grocery store in Nashville, WTVF reports. The supermarket will be called “The Store” and it will be located at Paisley’s alma mater, Belmont University.

“As you can imagine where you place this [store] is important and right at this age of where gentrification is happening,” Paisley said at the ground-breaking ceremony. “There’s people being squeezed out a little bit in this area. It’s just the perfect place.”

Country music star Brad Paisley puts on a hard hat shaped like a cowboy hat as he sits at the controls of a backhoe after digging a hole to break ground for The Store. Mark Humphrey / AP

The Store will be next to the Belmont Ministry Center, and Paisley noted it’s close to a bus stop, so it will be easy to access. College students will volunteer as store employees.

“You don’t learn necessarily things in a textbook,” Paisley said.”You can read statistics on hunger or you can read everything about this subject and never necessarily have it hit you in the heart like watching someone walk through this service – which is hopefully what’s going to happen as a student is volunteering here.” 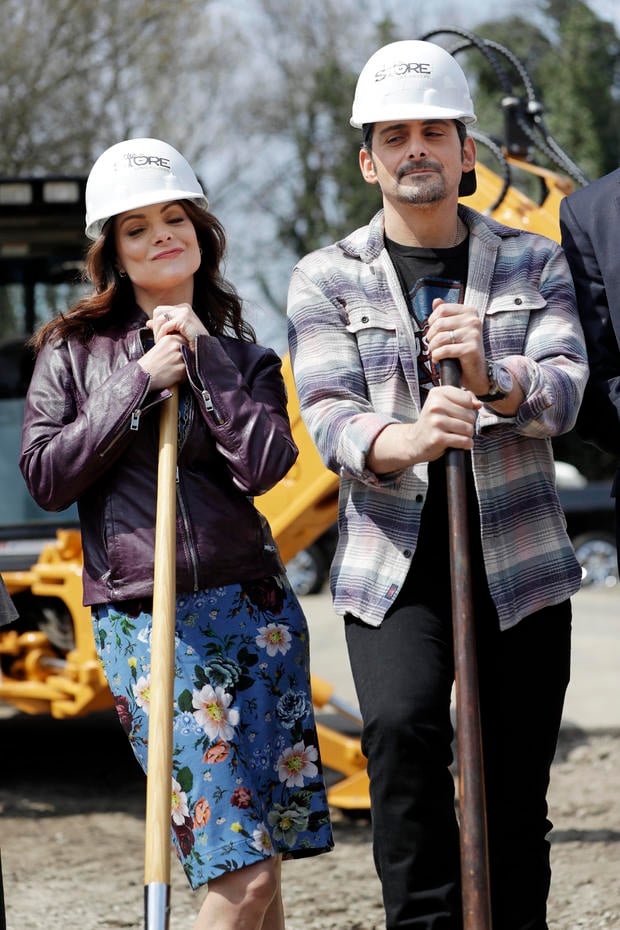 Brad Paisley and his wife, actress Kimberly Williams-Paisley, were inspired to open the free grocery store in Nashville after volunteering at a similar one in Santa Barbara, California. Mark Humphrey / AP

The Paisley family was inspired to open the free supermarket after volunteering at a similar store in Santa Barbara, California, according to The Store’s website. “We took our boys to Unity Shoppe to teach them about serving others and giving back to people in need,” Paisley said. “And we came away surprised by what the organization had taught us. Most people don’t want handouts. They want dignity and respect. Most people want to become self-sufficient.”

The goal of Paisley’s store is to serve at least 3,000 people in the Nashville area per year. “Over time, we plan to develop additional supplemental services beyond the grocery store, such as job training, cooking and nutrition classes,” The Store’s website reads.

The Store will include free donated food as well as deeply discounted food from the Second Harvest Food Bank and other sources, according to the website. The store will also be stocked with body care products from Thistle Farms in Nashville.