Behold the Edge, Celebrity Cruises’ brand-new, billion-dollar baby, Yes, that’s what it costs to build a cruise ship these days, often even more.

Thirty million people are expected to go on cruises in 2019, up more than 12 million from a decade ago, according to the Cruise Lines International Association.

‘We’re still just scratching the surface,” said Richard Fain, chairman and CEO of Royal Caribbean, Celebrity’s parent company. He knows a growth industry when he sees one. “In the United States, for example, only about three percent of Americans take a cruise in a given year. And if you go to Europe, it’s less than half that level. If you go to Asia, it’s a fraction of even that level.”

“We currently have 18 new ships on order,” he said. 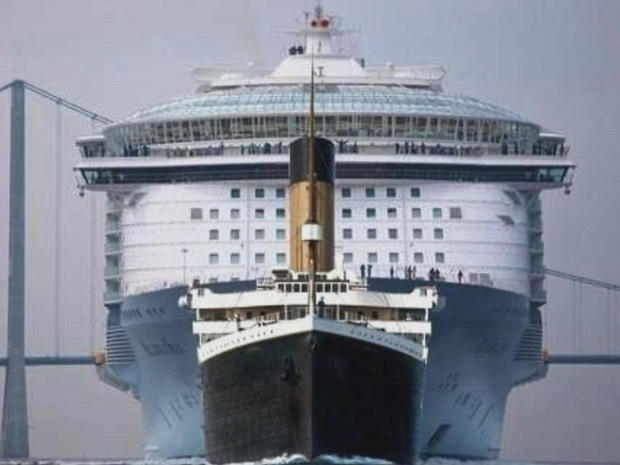 How the world’s largest cruise ship, Royal Caribbean’s Symphony of the Seas, would stack up next to RMS Titanic. CBS News

Royal Caribbean’s Symphony of the Seas is the world’s largest cruise ship at the moment. Capacity: more than 6,600 passengers, 2,200 crew. It’s five times the size of the Titanic.

The competition between them has been like an arms race, in which size matters.

“Back in the ’70s, the concept was, ‘Let’s design a ship that’s essentially like a yacht,'” Fain said. “By the 1980s, we were saying, ‘Let’s design something that’s much more like a hotel and has nicer rooms, nicer places to go, more things to do.’ And today we’re talking about, ‘This should be more like a city.'”

“The larger ship also gives us an economy of scale,” he replied. “We could just take it in profit, but then we weren’t giving them anything new.”

And new is the name of the game. So, Royal Caribbean says it sinks about half what it makes from those economies of scale into innovation.

In “The Cave,” the designers of the Edge used videogame technology to try out their ideas virtually. “It’s accurate to the point where one person noticed the olives in the martinis were too small!” laughed John-Paul Lamb, who is in charge of all hotel operations aboard the Edge.

But innovations, like the multi-colored chandeliers, are not just eye candy for the passengers. 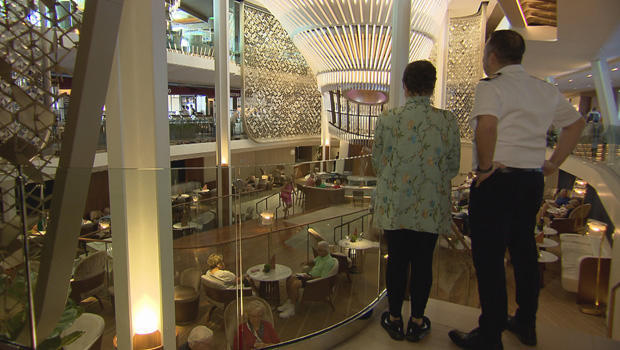 The bridge, the domain of Captain Dimitrios Kefetzis, is more space-age than swashbuckling. “This is state-of-the-art,” he told Teichner. “It cannot be any better as we speak.”

Unique in the cruise ship world: A super-sophisticated touchscreen. 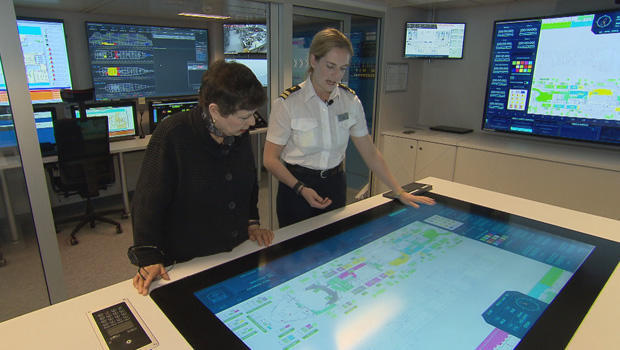 At the bridge of the Celebrity Edge. CBS News

And below the passenger decks is a “superhighway” that the crew refers to as “I-95.” “It goes all the way form the aft of the ship, the very back of the ship, all the way to the tip,” said Lamb.

It’s over a thousand feet long, and behind each door, something amazing. How about a room filled with red wine? 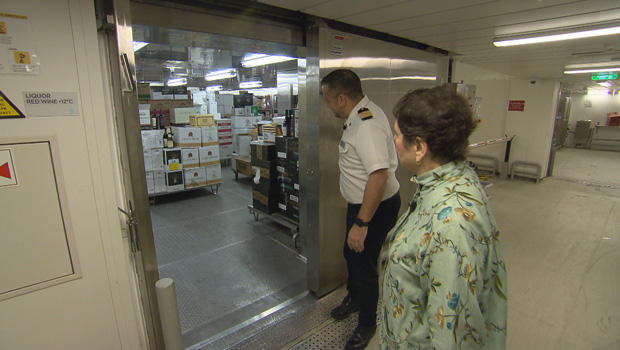 A wine cellar aboard the Celebrity Edge. CBS News

And chilling in a refrigerated room are pallets of aluminum water bottles. “When we launched Edge, we made a commitment that we would eliminate all single-use plastics on board,” said Lamb.

In an industry not known for environmental responsibility, the Edge has its own recycling operation. There’s a sewage treatment plant on board, too.

But what attracts passengers is that next big thing. Aboard the Edge is a Magic Carpet, a 90-ton platform that levitates up and down the side of the ship. 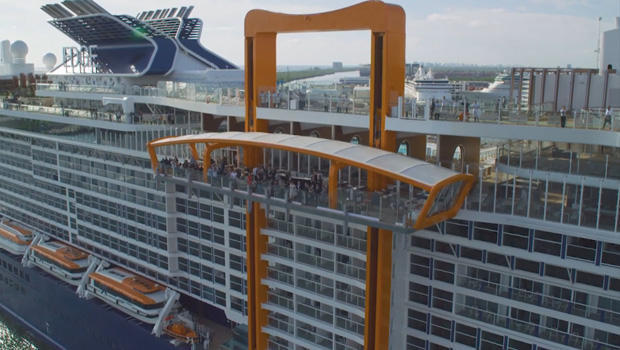 The “Magic Carpet” on the Celebrity Edge. CBS News

You’re on the very edge of the Edge.

Lamb said, “We can take it all the way up to Deck 16, we can bring it down here to Deck 5, or we can take it right down to Deck 1.  You’re always looking at the ocean. That’s what makes this ship special.

Not a bad place to watch the sun set. 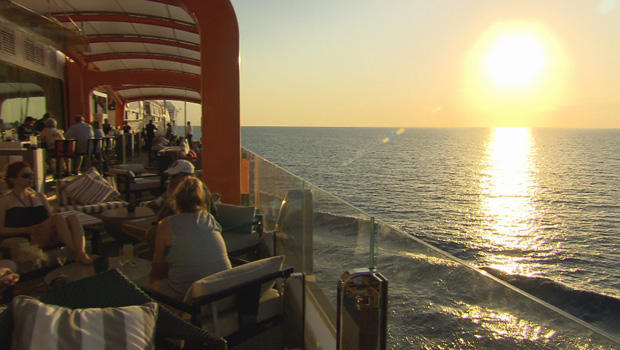