Cello means “everything” in musician’s journey from poverty

Fairfax, Virginia — When Eddie Adams plays the cello, the sound is mind-blowing. And so is the path he took to get here.

Adams grew up in poverty – at times his family was homeless.

“I just remember it was kind of weird — especially having to take the school bus from the homeless shelter,” Adams said.

Despite the extreme hardship, he’s now the lead cellist in the orchestra at Virginia’s George Mason University.

He said he discovered the cello in junior high school by accident.

“I tried percussion and they said I had no rhythm,” Adams said.

So his music teacher suggested the cello

But with encouragement from teachers and help from YouTube cello videos, he persevered.

By high school, he became so good so quickly that George Mason offered him a full tuition scholarship even though he had never had a private lesson.

“He has talent. Enormous talent,” said June Huang, the director of string instruments at George Mason. “Is it amazing he got this far got into college without a formal lesson? That is amazing.” 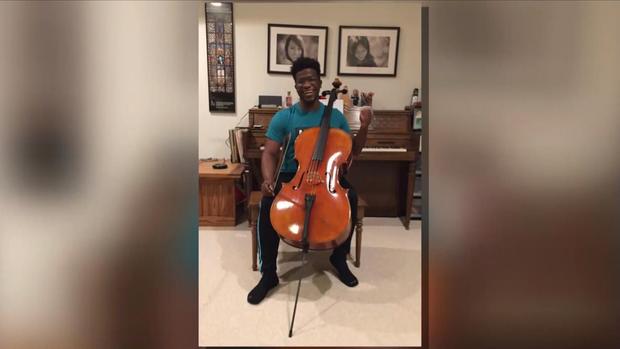 At his audition, she was so overwhelmed she dropped her pencil and forgot to take notes.

“I remember that moment because it’s unique when you hear music come fro the core of somebody, the silent peaceful middle of someone and I felt honored to witness that,” Huang said.

Adams said he wouldn’t have made it this far without Huang and other teachers who gave encouragement and financial assistance when necessary.

He couldn’t afford a cello, so she lent him hers.

“He made beautiful music on my terrible cello,” Huang said.

Through it all he has remained humble.

He said when he plays, “mostly it’s me trying to ignore the fact that there’s hundreds of people in front of me.”

“That was one of my first major performances that I’ve ever done,” Adams said. “I was happy that I got through it.”

He said the cello means “everything” to him “because it’s kind of gotten me everything that I have now. And it got me into school and I never saw myself in college.”

From poverty to the richness of the cello and with a wealth of opportunity ahead.

Eddie’s story has inspired people to help him cover his college costs. They’ve set up a GoFundMe page that’s received more than 140-thousand dollars in donations.