CHATTANOOGA (WDEF) – Officials with the City of Chattanooga say they have completed relocating the homeless from an encampment near some railroad tracks on 11th street.

The move has been a two month process.

The 140 residents were given a choice of the new temporary sanctioned encampment or referral to CHA permanent housing.

If they declined both, they were offered a new tent and a ride. 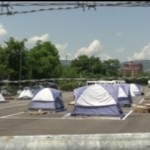 So far, the temporary encampment has 15 residents with plans to increase that to 60 by the end of the summer.

Officials say the City’s Office of Homelessness and Supportive Housing has placed more than 35 homeless into permanent homes over the past two months.

“The solution to homelessness is a home, and we will continue to work every day to help our most vulnerable residents find an off-ramp from homelessness that works for them and their families,” said Sam Wolfe, director of the city’s Office of Homelessness and Supportive Housing. “Since its inception, our team has placed hundreds of residents into homes, and along with our partners at the Chattanooga Regional Homeless Coalition, we will continue to work to both tend to their immediate needs as well as help them navigate the path to housing.”