Utah’s Bonneville Salt Flats have been one of America’s most famous speedways for more than 100 years. The salt that stretches for miles and miles in northwest Utah makes the region look like a different planet — one that is uniquely suited to making vehicles race very fast.

But today, the salt that is essential to racing is going away — and a bitter debate is raging over how that loss should be handled.

Amateur racers and their families have been coming to the Bonneville speedway for generations. Olivia Nish, 19, described racing at the flats as a “rush.”

At the flats, racers drive amped-up trucks, motorcycles, streamliners, and more, sometimes at speeds of more than 500 mph. That’s because thousands of years ago, a body of water the size of Lake Michigan evaporated, boxed in by surrounding mountains. The salt that was left behind was moist and cool and allowed tires to grip without overheating.

But that salt is changing. “I don’t think that the general public realizes that this place is being taken away,” said Dennis Sullivan, president of the Utah Salt Flats Racing Association. “We blame the people that gave the leases. We think they were so poorly done that it took all the salt away.”

Specifically, Sullivan blames the Bureau of Land Management, which oversees the salt flats for the federal government. More than 50 years ago, the BLM made deals with mining companies that use the land to get potash, a fertilizer. The process requires separating out the salt from the potash. But the racing association said the leases don’t require companies to put the leftover salt back.

The racing association said the top layer of salt was once four feet thick, and is now in most places down to 1 inch. The Bureau of Land Management acknowledges a 7% decrease of the “crust package” over the last decade and a half – but Kevin Oliver, the Utah West manager for the BLM, said that Sullivan is exaggerating the damage done to the flats.

Brenda Bowen, a scientist who’s been studying the salt flats, said that the amount of salt in the landscape has decreased over the past 30 years. The racing community said much of that lost salt sits just a thousand feet from the track, remnants of the mining – and they want $50 million to put it back.

“When I first came out here, you never saw any bumps. It was flat as a billiard table,” said Louise Noeth. Noeth is a long-time automotive journalist who’s now the spokesperson for Save the Salt, a nonprofit that wants the speedway replenished. She is also a former racer, which makes her mission personal. 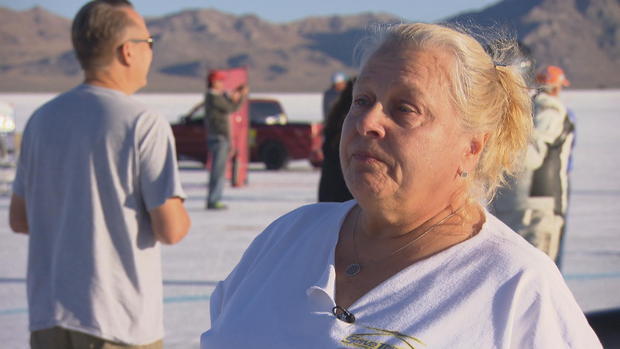 “America was built on hopes and dreams, and they’re killing the dreams,” Noeth said through tears. “These are ordinary people doin’ extraordinary things.”

Bowen, the scientist, said it’s a combination of factors that has led to less salt on the track. That includes the mining – but it also includes changes in environmental conditions and land use, including the racing.

CBS News reached out to the mining company Intrepid Potash. The company declined to be interviewed but said it is returning hundreds of thousands of tons of salt each year.

The racing association said it’s not enough – and that they believe that any effect the racers are having on the salt is negligible in comparison. But Bowen has a different answer.

“I would say leave it alone for a few years,” she said. “Don’t come out here. Don’t drive on it when it’s wet, give it a minute, and let’s see where it gets to.” 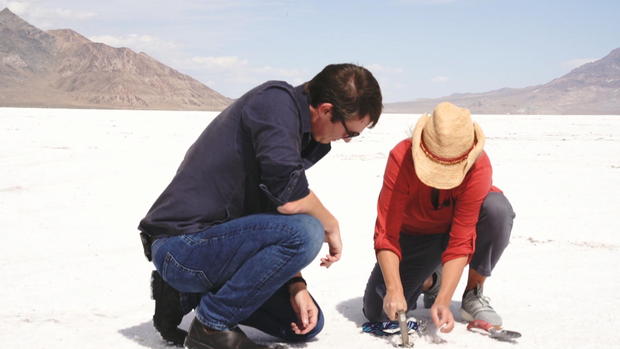 Bowen examines the condition of the salt flats CBS News

“I mean, it’s not a racetrack in a warehouse. It’s not an indoor environment. It’s nature,” Bowen responded.

Olivia Nish, the first female driver in her family’s three generations of racing at Bonneville, hit 155 mph on her first run, before spinning out while attempting to hit 180 mph on run number two.

She plans to be back for many more, despite the controversy. “It is disappointing to see,” she said. “But we just make the best of what we have and drive, right?”