Doctors in California are trying to solve a family’s stunning medical mystery. Two young siblings, four and six years old, were diagnosed with the same kind of brain tumor within two weeks of each other.

Less than a week after Kalea had surgery to remove her tumor, her brother, Noah, started complaining about headaches. Duncan Avery, the siblings’ father, initially thought it was psychological.

“When he said, you know, ‘my head hurts between my eyes’ he’s pointing right to where his sister was,” Duncan said. “We’re like, ‘okay, he’s mimicking his sister, he misses his sister, it’s just him dealing with all these emotions.'” 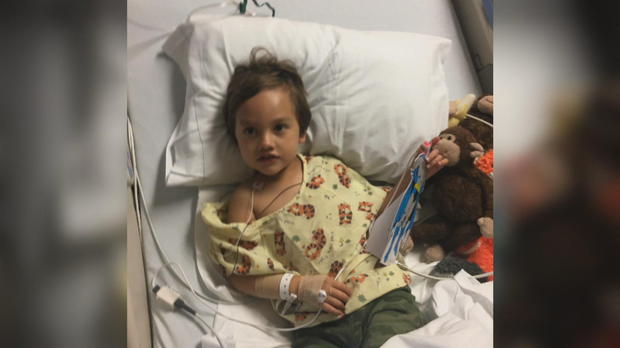 Noah Avery, shown after being diagnosed with the same type of cancer his sister has

But an MRI would reveal the same aggressive tumor in the back of the brain. Known as a medulloblastoma, the cancer affects between 250 and 500 children in the U.S. every year.

“I literally, like, I didn’t even respond, I kind of went numb,” Nohea, the siblings’ mother, said. “We’re all of a sudden hit with this and we’re starting all over again with our second child. At that point I was just like, ‘how are we going to get through this?'”

Dr. Alan Wayne, director of the Children’s Center for Cancer and Blood Diseases at Children’s Hospital Los Angeles, is treating the two children.

“They’ve both had surgery already, they’re doing well post-operatively,” Wayne said. “Next comes the beginning of chemotherapy and in some cases additional therapy beyond chemo.” 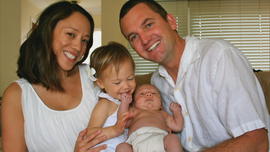 He and his team are also looking for the cause of the cancer by studying potential gene abnormalities.

“It’s extremely rare to have two cancers in a family which in and of itself raises the possibility of this being an inherited genetic predisposition,” Wayne said.

Because the tumor affects the cerebellum, balance and coordination can be affected. Wayne did have good news about the likelihood the cancer returns to the two kids.

“Most of the time with medulloblastoma, the children are cured,” Dr. Wayne said.

The siblings are now working with a team of oncologists and physical therapists, facing the road to recovery together. Duncan and Nohea look for small victories.

“There are different goals that we have as a family,” Duncan said, “and we look forward to hitting those milestones.”

“When they’re like ‘how is Noah doing? How is Kalea doing?’ You know, I’ll say she laughed for the first time,” Nohea said, “Like it brings tears to my eyes, just like joy. Like the simplest things are amazing now.”