A wildfire exploded overnight in Southern California, burning dozens of homes and prompting mandatory evacuations. High winds driving the flames were expected to last for hours.

The fire started Thursday night in Sylmar, northwest of downtown Los Angeles. Fueled by dry conditions and wind gusts of up to 70 mph, the Saddleridge Fire had consumed more than 4,700 acres by 7:30 a.m. Friday, fire officials said.

It’s one of eight active wildfires burning in California days after power was shut off to hundreds of thousands of people in an effort to prevent fires. The Saddleridge Fire broke out after 9 p.m. along the 210 Freeway and jumped the highway.

Flames also crossed the 5 Freeway. The highways were closed because of heavy smoke.

At least 25 homes were damaged. The cause of the fire had not been determined.

Firefighters were working to contain the flames more than six hours after they began as erratic winds blew embers into more structures. Seventy-four were destroyed.

Some people shoveled dirt onto hotspots and pulled out their own hoses to try and stop the fire from spreading. An 89-year-old woman, Lois Arvickson, was missing, according to her son.

Meanwhile, in Northern California, the winds were calmer, and Pacific Gas & Electric faced hostility and second-guessing over its widespread shut-offs. Governor Gavin Newsom criticized PG&E, and ordinary customers complained about the inconveniences caused by the unprecedented blackouts that began midweek.

PG&E, though, suggested it was already seeing the wisdom of its decision borne out as gusts topping 77 mph raked the San Francisco Bay Area amid a bout of dry, windy weather. “We have found multiple cases of damage or hazards” caused by heavy winds, including fallen branches that came in contact with overhead lines, said Sumeet Singh, a vice president for the utility. “If they were energized, they could’ve ignited.” 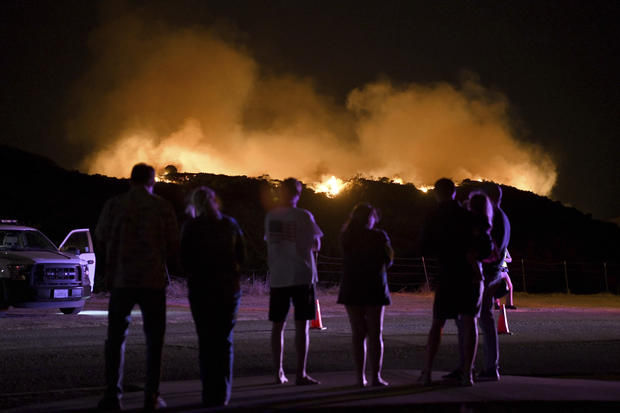 Because of the dangerous weather in the forecast, PG&E cut power Wednesday to an estimated 2 million people in an area that spanned the Bay Area, the wine country north of San Francisco, the agricultural Central Valley and the Sierra Nevada foothills. By Thursday evening, the weather had eased and the number of people in the dark was down to about 510,000.

Inspections and repairs were expected to resume at daybreak and power could be restored Friday to many more customers, Singh said. PG&E cast the blackouts as a matter of public safety, aimed at preventing the kind of blazes that have killed scores of people over the past couple of years, destroyed thousands of homes, and ran up tens of billions of dollars in claims that drove the company into bankruptcy.

CEO Bill Johnson didn’t respond to Newsom’s criticisms but promised if future wind events require similar shut-offs, the utility will “do better” when it comes to communicating with customers. It’s unacceptable that its websites crashed, maps were inconsistent and call centers were overloaded, Johnson said.

“We were not adequately prepared,” he said.