UPDATE: Officials now say it took between 50-60 firefighters to control this.  The home will have to be torn down to put out the last smoldering embers.

CHATTANOOGA (WDEF) – It has taken a lot of help to contain a house fire in Highland Park Monday afternoon.

It happened in the 1500 block of Chamberlain Avenue near the National Cemetery.

Firefighters were pouring on the water from all four sides of the home as flames shot through the attic.

The roof has collapsed.

The homeowner tells our reports that she did get all of her pets out alive and no one was hurt.

Crews have managed to keep the flames from spreading to the house next door.

Firefighters were actually in the neighboring house spraying water onto the flames next door. 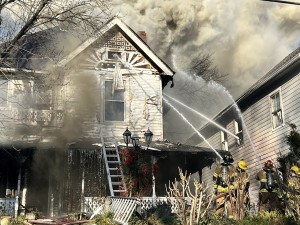