Homeless population rises for third year in a row

Washington — The federal government is reporting a 2.7% increase in the nation’s homeless population driven by a spike in California, according to an annual count that took place in January 2019.

The Department of Housing and Urban Development is reporting its third consecutive uptick in its homelessness projection for the country, based on a summary of its annual report obtained by The Associated Press.

President Trump has been highly critical of the homeless problem in California, and HUD said the increase seen in its January snapshot was caused “entirely” by a 16.4% increase in California’s homeless population.

“As we look across our nation, we see great progress, but we’re also seeing a continued increase in street homelessness along our West Coast where the cost of housing is extremely high,” HUD Secretary Ben Carson said. “In fact, homelessness in California is at a crisis level and needs to be addressed by local and state leaders with crisis-like urgency.”

There have been reports that the Trump administration is considering moving homeless people in California off the streets and into unused federal buildings.

California has asked the Trump administration to approve 50,000 federal housing vouchers to help alleviate homelessness since September. HUD has resisted.

Earlier this month, a consultant known for urging cities to stop “enabling” homeless people was tapped to lead the U.S. Interagency Council on Homelessness. The Trump administration replaced the Obama-era executive director with Robert Marbut, who has blocked charities from handing out food to homeless people.

“You can’t be feeding on the street. But likewise, you have to provide and enhance and sometimes create programs that address the root causes, because hunger is not the root cause of homelessness,” he told NPR in 2014.

Tarps cover a tent for the homeless in Los Angeles. FREDERIC J. BROWN

Every year, communities around the country organize efforts to visit every shelter, park and alley in their communities to count the homeless population. The single night snapshot represents a key benchmark to determine how the nation is faring in the effort to end homelessness.

About two-thirds of the homeless were living in emergency shelters, transitional housing programs and other sheltered locations. And slightly more than a third were in the streets, abandoned buildings and other unsheltered locations considered unsuitable for human habitation. 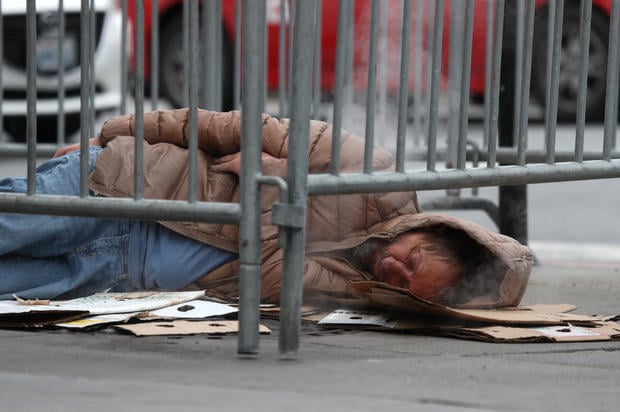 A homeless man sleeps on the sidewalk in San Francisco. Getty Images

Democratic Governor Gavin Newsom of California said the state is doing more than ever to tackle the homelessness crisis, but the federal government also must step up and put “real skin in the game.”

“Federal leadership matters. Investments made during the Obama administration are proving effective and have contributed to more than a 50% drop in homelessness among veterans since 2010,” Newsom said.

“But we have work to do,” he said. “And we need the federal government to do its part.”

While the overall homeless count increased, there continued to be pockets of progress. The HUD count found 37,085 homeless veterans, a decline of 2.1% from 2018. The number of homeless families with children dropped nearly 5%.

The report finds that states with the lowest rates of homelessness per 10,000 people are Mississippi, Louisiana, Alabama, Virginia and North Dakota.

The states with the highest rates were New York, Hawaii, California, Oregon and Washington. The District of Columbia had a homelessness rate of 94 per 10,000 people, more than twice as high as New York.