Island-Hopping: Tourism in the Galápagos

Summer vacation season is in full swing. Orlando is this year’s top tourist destination, according to AAA, followed by Honolulu and Anchorage, Alaska. Or, you could get creative and go island-hopping with Conor Knighton:

“It seems to be a little world within itself.” When Charles Darwin wrote about his 1835 visit to the Galápagos Islands, most of the world had never heard of this place.

They would! Two decades later, after Darwin referenced the wonders he saw there in his groundbreaking “On the Origin of Species,” the small chain of islands off the coast of Ecuador would be forever associated with his theory of evolution. But it took another century for the Galápagos to begin to evolve into a tourist destination.

Darwin didn’t exactly sell it. He described the marine iguana, only found here, as an “imp of darkness … a hideous-looking creature … stupid and sluggish in its movements”  But today, it’s a bucket list photo op.

Marine iguanas are ready for their closeup.

The first wave of shutterbugs came just 51 years ago, brought by Swedish entrepreneur Lars-Eric Lindblad.  “When I think back on him, I just miss him all the time, because he was clairvoyant. He was so far ahead of his time,” said his son, Sven Lindblad. 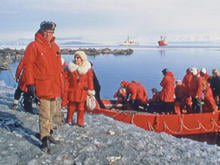 Swedish entrepreneur Lars-Eric Lindblad was a pioneer in bringing tourists to the ends of the Earth.

Lars-Eric, who died in 1994, is considered one of the fathers of eco-tourism and “expedition cruising.” His ships brought the first organized tour groups to Antarctica, Easter Island, and, in 1967, the Galápagos. An explorer at heart, Lars-Eric mostly wanted to see these places for himself.

“He thought about becoming a missionary,” Sven laughed. “But he wasn’t religious, so that was a bit of a problem. And then he decided to get in the travel industry, primarily as a vehicle to explore the world.”

Lars-Eric built his business by taking adventurous vacationers to exotic destinations they’d never really considered before. In doing so, he tapped into a lucrative niche – cruises for people who don’t like cruises.

Bunny Fortier told Knighton she’d taken a traditional cruise once: “I always say, ‘We did it twice. The first time and the last time,'” she laughed.

Fortier has taken eight trips with the company, Lindblad Expeditions, which Sven runs today. There are no casinos or karaoke on these boats. Instead, naturalists give daily presentations. 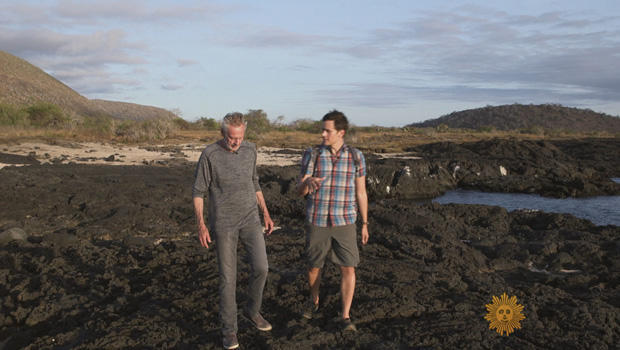 Sven Lindblad said, “Cruising, I think, is inward-looking. It’s about the ship. Expedition cruising, it’s really about the outside. It’s what’s outside of the ship.”

Expedition cruising is one of the fastest -growing sectors in the cruise business. Visitors are paying thousands of dollars to sail to places that still feel wild and pristine.

“None of the animals seem to care at all that we’re right up next to them, and they just keep doing their thing,” said Stephanie Grubert. 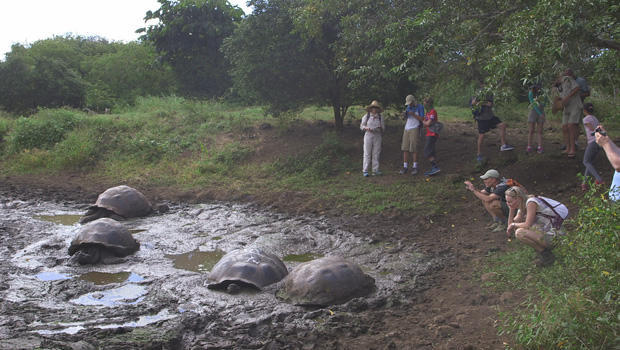 Tourists mingle with locals on the Galápagos Islands.

Of course, it’s a business model that only works if these places stay pristine. Today more than 220,000 visitors come to the Galápagos each year. The National Park has had to step in, strictly regulating how frequently each boat can visit each site.

Lindblad’s boat must wait 14 days to return. “You have to stagger it,” he said.

Sven’s father knew that from Day One. Lars-Eric paid the salaries of the first two Galápagos national park rangers. It was an investment in the future – a hope that the same wonders that Darwin saw would still be there for future generations of explorers to enjoy. 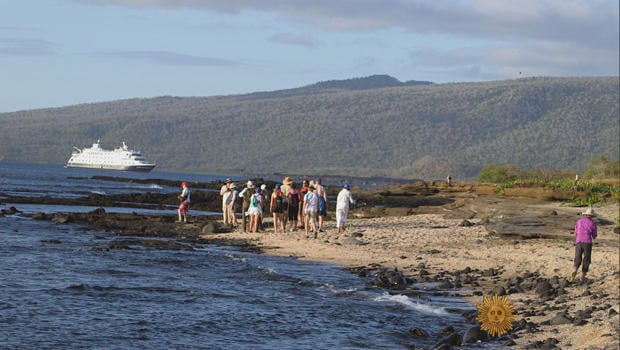 Nearly 200 years after the HMS Beagle arrived at the Galápagos Islands, cruise ships bring a limited number of eco-tourists to the unique islands off the coast of South America.