It’s lunchtime at Winthrop Elementary in New London, Connecticut, and these kids are hungry. They could eat pasta or tuna, or something a little more exotic. How about hummus?

“Give the hummus a try!”

The man behind the hummus, a nutritious Middle Eastern dip, is 34-year-old Dan Giusti. He founded and runs Brigaid, a company that’s revolutionizing cafeteria cuisine.

“There is a problem with school food in general, because this idea that the kids don’t deserve high-quality, which obviously they do,” he said. “If anybody, they’re a captive audience, and they’re our kids. If anybody deserves the best food that we can give them, it’s them, because they have no choice.”

How Giusti ended up in this cafeteria is quite a story, given that his last job was head chef at what many consider the “best restaurant” in the world: Noma, in Copenhagen.  “Noma is the reason that has opened up a lot of doors for me,” he said.

After working for three years at Noma, a small restaurant with about 45 seats, where diners paid about $500 for a meal, Giusti decided he wanted to do something bigger.

“I knew I wanted to feed more people; that was the big thing,” he told correspondent Nancy Giles. “I wanted to make food with real purpose that really contributed to something.”

So, in 2015 he announced he was leaving Noma to “fix America’s school lunches,” stunning the food world. Foodies may have been flummoxed, but Giusti had found his calling.

“It’s called school food. Like, that’s weird,” he said. “It should just be food. A lot of the food that is served in a school would never be served anywhere else, and that’s the unfortunate fact.”

New London now benefits from a technique he picked up at Noma: The power of the personal touch. It’s Brigaid policy that their chefs talk to the students about the food. As Chef Ryan explained to some students, “If you don’t like it, then you just know you don’t like it. But if you like it, now you have something new to eat for your whole life!”

Giusti said, “If food comes to you and you don’t really have a face to put to it, it’s just food. But when there’s, ‘Okay, well Chef Wes made this,’ it’s like, oh, you like that person, therefore the food has more meaning to it.”

Giles asked some of the children what they’ve learned about the food they’re eating: “That it’s actually fresh.” “It’s not from a box.” “And it’s made from scratch.”

“Sometimes I want to go up for seconds.”

Giles asked one little boy, “Do you like the food?” “No. I love it!” he replied. 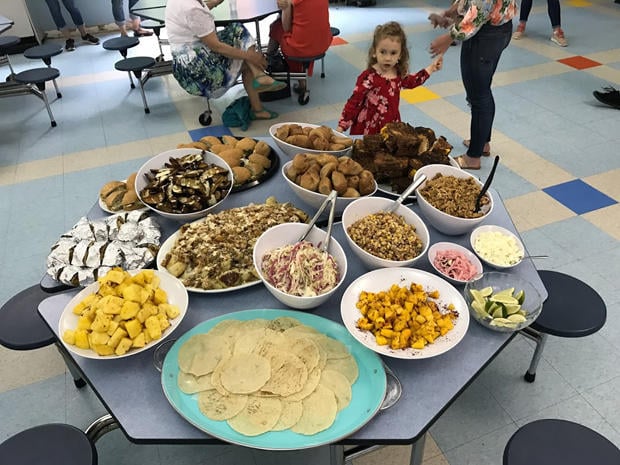 But kids can be picky eaters, and they don’t always love it. Giusti admitted it is a whole different thing, cooking for kids. “One time we had this butternut squash soup, it had the coconut milk in it and ginger. It was delicious. It was really tasty. And I remember this kid, he was eating it. And he just spits it out! I was like, okay.”

Lucky for New London, Manuel Rivera isn’t picky … but he is choosy. “If we can’t eat it, we shouldn’t serve it to our kids,” he said.

Rivera was the school superintendent who hired Giusti in 2016 to cook for New London’s 3,500 schoolkids. Some folks thought he was wasting tax dollars. “We had one comment, I think it was, ‘Boy, the next thing you know Rivera will be getting limousines for the students!'”

Yet, compared to what the city was spending with their prior food service companies, Rivera says the cost New London public school taxpayers is zero.  Thanks to fundraising efforts (like Brigaid’s popular weekly community dinner) and generous corporate and private grants, New London’s taxpayers still haven’t been hit.

But cost, and what the federal school lunch program will reimburse New London, is an issue. It’s around $3.50 a meal, which doesn’t sound so bad, but Giusti explains that’s just the cost of paying people to make the food and for maintenance. “So, when it’s all said and done, you have about $1.25 for food. Making food, a meal that kids really want to eat, for $1.25 is super challenging.”

Last spring Giusti invited a dozen star chefs, some of the best in the country, up to New London to compete in a fundraiser, to see what kind of meal they could create for a buck and a quarter.

Giles asked Langhorne, “How much does a meal cost at your restaurant?”

“It depends on what you get,” he said.

“Well, Jeremiah, do you have anything at your restaurant that’s 1.25?”

Chef Jeremy Fox, of Rustic Canyon in Los Angeles, was more optimistic. His restaurant’s average price for a meal is $75-80 per person. “That’s with wine. But these kids aren’t going to drink nearly as much wine as the adults!” Fox said.

Knowing that the winning meals could end up on the Brigaid menu, the chefs didn’t let their budget limit their imagination. They whipped up chicken tacos, Futomaki rolls, tofu lasagna, Monte Cristo sandwiches … ten meals in all

Then the chefs delivered the food. A panel of New London students and out-of-town adults (including Nancy Giles) were the judges.

One little boy said, “I think this one would win for me.”

The winner was Ghetto Gastro, a “nomadic culinary collective” from The Bronx, N.Y., with a Caribbean fish sandwich – haddock seasoned with herbs and lemon juice – hardly what you’d expect kids to eat willingly. 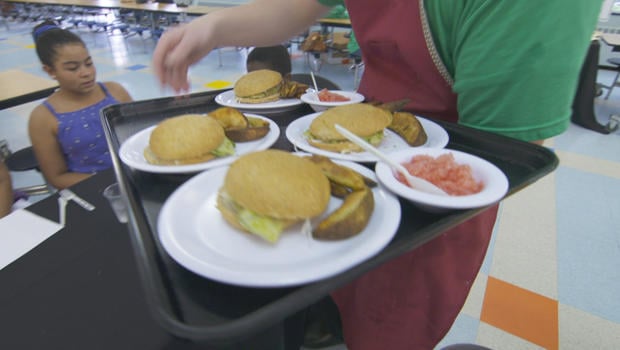 “Fish is one of those things that it’s kind of hard to approach to children, you know what I mean? Just the smell,” said Chef Malcolm. “But I think we wanted to take a challenge, and then show them that, you know, this could be really delicious.”

And their secret ingredient? The power of the personal touch

“Not to say that the other chefs aren’t charismatic, but they put extra effort,” said Giusti. “They told me – they’re smart – they were like, ‘We’re gonna sell this to the kids.’ And I’m like, ‘You knew who to talk to!'”

And now, Dan Giusti and Brigaid are expanding to the largest school district in the country: New York City’s, starting at Morris High School in the Bronx.

Once more, Giusti is thinking big. “There’s 1,800 schools in New York City,” he said. “But I mean, the goal is to get everywhere. To me, my dream is in ten years that things are just different, that it is normal to do what we do.”