House Speaker Nancy Pelosi was named the recipient of this year’s Profile in Courage Award by the John F. Kennedy Library Foundation. The award, which has been called the Nobel Prize for public figures, is given for an act, or a lifetime, of political courage.

In a statement, Caroline Kennedy called Pelosi “the most important woman in American political history.”

The first female to be elected Speaker, and the first person elected Speaker in non-consecutive terms in over 60 years, Pelosi has served in the House of Representatives since 1987. The California Democrat worked with a Republican president to pass an economic bailout package in 2008, and with a Democratic president to pass landmark healthcare reform in 2010, despite strong opposition in both cases.

“So, the courage that that takes, really, I think, makes her an example and an inspiration for generations of Americans, men and women,” Kennedy said.

“Coming from Caroline, that’s an enormous compliment,” Pelosi told “Sunday Morning” correspondent Martha Teichner. “However, going with it are shoulders for other people to stand on. I’ve stood on many women’s shoulders, who have paved the way for us. And now we have to pave the way for others. So, it’s about the future.”

Speaker Nancy Pelosi ushers in the 116th Congress of the United States, with the children and grandchildren of legislators in attendance.  CBS News

In 1956, as a young Senator and war hero, John F. Kennedy published “Profiles in Courage” about some of his own heroes – eight U.S. Senators who did what they thought was right, not what was popular, even if it destroyed their political careers. The book won the Pulitzer Prize.

As a teenager, Pelosi was pictured standing next to Senator Kennedy, her idol: “My father was the mayor of Baltimore and there was a big dinner, black tie dinner, where Senator Kennedy was going to speak. My mother, she said, ‘If you want to go in my place to the dinner, please do.’ 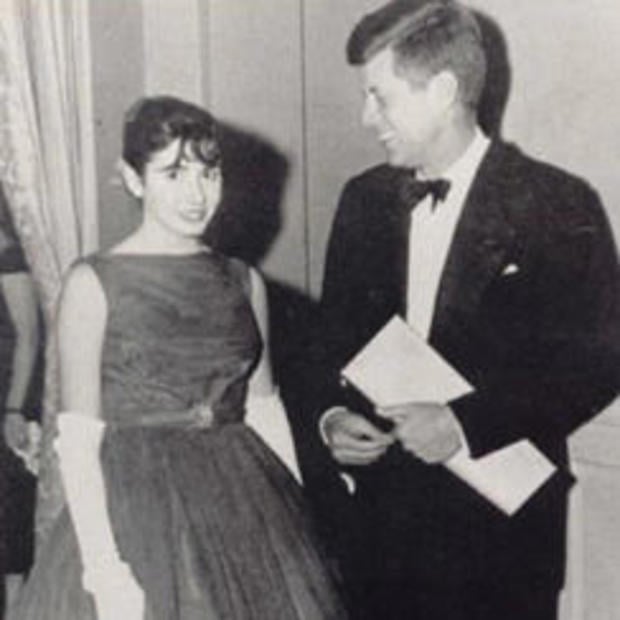 “It’s a great picture, relating to the inspiration that President Kennedy was to my generation and those that followed,” she said.

Caroline Kennedy, the president’s daughter, said, “In 1989, our family was thinking about how to memorialize him and remember him, and we decided to do it by honoring the quality that he thought was most essential in public life, which was courage.”

Since then, every year, the Profile in Courage Award has been given, without regard to party. It’s silver and heavy and made to look like a ship’s lantern. “We wanted something that would be both symbolic and beautiful,” Caroline said. “Hopefully, the symbolism of the lantern will also help us all go forward, following our courageous leader.”

Teichner asked Jack Schlossberg, Caroline Kennedy’s son, who join his mother in the award presentation, about civic involvement – his inherited legacy in many ways. 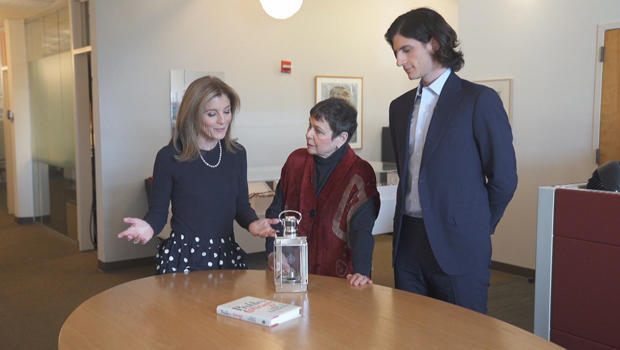 In his introduction to “Profiles in Courage,” JFK wrote: “Compromise need not mean cowardice,” a surprising concept in today’s climate of political divisiveness, along with bi-partisanship.

In 1999, the award was given jointly to two Senators, Republican John McCain of Arizona and Democrat Russ Feingold of Wisconsin, who together pushed to regulate special interest money in politics.

McCain’s widow, Cindy McCain, said, “The two of them were so dedicated to it, it was part of both their lives, but particularly my husband; it was the essence of who he was.”

Teichner asked, “Did he get criticized? Was he vilified?” 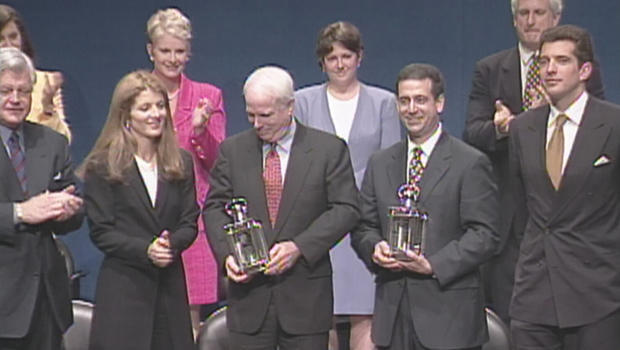 Caroline Kennedy presents the Profile in Courage Award to Senators John McCain and Russ Feingold at a 1999 ceremony. CBS News

Cindy McCain remembers it was Ted Kennedy who told her husband he had won the award: “John and Ted were polar opposites politically. They fought on the floor, swear words, I mean complete knock-down-drag-out. And when it was over, Ted walked over to John, put his arm around him, said, ‘Wasn’t that fun?'”

The day of the ceremony was the McCains’ son Jimmy’s birthday, so the Kennedys arranged for them all to arrive in style on a Coast Guard cutter.

Speaking of the award, Cindy McCain said her husband described it to their children as “a beacon of light.”

“It was very precious. This was, I believe, the most special award to John ever,” she said.

The famous and not-so-famous have been picked. In 1997 Alabama circuit judge Charles Price was honored for making the very unpopular call that his fellow judge, Roy Moore, was violating the Constitution by displaying the Ten Commandments in his courtroom.

And in 2000, a kid from South Bend, Indiana named Pete Buttigieg, won the Profile in Courage high school essay contest. He wrote about Bernie Sanders. Now it looks like he’s running against him for president.

Elected Mayor of New Orleans in 2010, five years after Hurricane Katrina, Mitch Landrieu inherited a city still ravaged by the storm. “I would tell the people of New Orleans, ‘Look, if we’re gonna come back, you have to sacrifice. This is gonna hurt.'”

On his watch, the city was rebuilt: new hospitals, new schools, a new airport, a massive new flood protection system. But it was something much riskier politically that won Landrieu last year’s Profile in Courage Award, something suggested to him by his friend since childhood, trumpeter and New Orleans native Wynton Marsalis. He told Landrieu, “You should take those monuments down.”

Marsalis was talking about the Confederate statues regarded as an affront by African Americans who represent more than 60% of the city’s population.

Landrieu recalled, “When he said that to me, really it was like getting hit in the head with a bat.”

He waited, then chose his moment, after white supremacist Dylann Roof killed nine African Americans in a Charleston, S.C. church. Taking advantage of the national outrage, Landrieu announced that in New Orleans, the Confederate monuments would be removed. “There is a difference, you see, between remembrance of history and the reverence of it,” he said in May 2017 following the monuments’ removal.

“The blowback was immediate,” he said. “Anybody who showed up to say they wanted to help started receiving awful phone calls, death threats. The first contractor that showed up had his car firebombed.”

Correspondent Martha Teichner asked, “Did you have threats against you?”

But finally, by May 2017, after more than two years of legal wrangling, all four of the monuments had come down.

Landrieu said, “I was really just doing what I thought was the right thing, and I just didn’t want to walk away from it, because I wanted to be able to live with myself.” 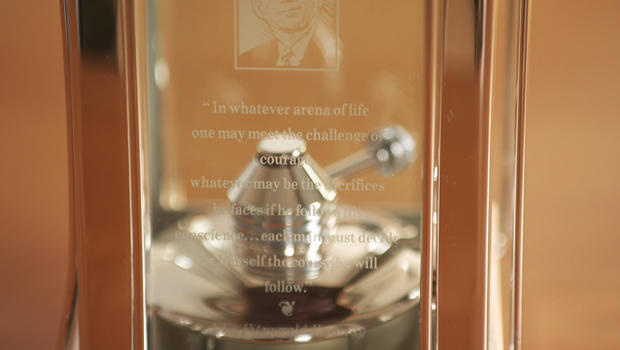 The inscription, from Kennedy’s book “Profiles in Courage,” reads: “In whatever arena of life one may meet the challenge of courage, whatever may be the sacrifices he faces if he follows his conscience … each man must decide for himself the course he will follow.” CBS News