The White House Office of Science and Technology Policy is spearheading a 10-year plan to improve detection of near-Earth asteroids and comets that could crash into Earth and to expand research into possible countermeasures to deflect an incoming body if detected in time, officials said Wednesday.

“For emergency managers, this is so different we have to first educate them,” said Leviticus Lewis, an official with the Federal Emergency Management Agency, or FEMA.

“Everybody in America knows what a hurricane curve looks like, or the error cone. But if we show impact possibilities for an asteroid, most emergency managers will have no idea what that means or how NASA even came up with this information.”

The strategy and action plan says it is intended to “inform” policy development and that future funding “will be determined through the budget process.”

“Fortunately, this type of destructive event is extremely rare,” said Aaron Miles, representing the OSTP. “NASA and its partners have identified more than 95 percent of all asteroids that are large enough to cause a global catastrophe, and none of those found poses a threat within this century. Nevertheless, asteroid impacts do occur.”

One hundred years ago, an object estimated at 130 to 200 feet across exploded over Tunguska, Russia, in 1908, releasing the energy equivalent of up to 10 million tons of TNT and flattening trees across 770 square miles. The devastation from a similar event today would stretch across the entire metropolitan New York area.

An asteroid or comet between 130 and 200 feet across exploded over Tunguska, Russia, in 1908, leveling trees in a 770-square-mile area. A similar blast today would wreak havoc across the entire metropolitan New York area.

In February 2013, a 60-foot-wide meteor exploded above Chelyabinsk, Russia, releasing the energy of 30 atomic bombs, damaging buildings below and injuring more than 1,000 people. Current estimates indicate a population of nearly 10 million NEOs larger than 60 feet across.

Chelyabinsk-class events happen every 30 to 40 years, researchers calculate, while impacts by objects with diameters greater than one mile occur once every several hundred thousand years.

But every day, more than 100 tons of asteroid and comet debris slams into Earth’s atmosphere and while the vast majority of it burns up high above the surface, objects with diameters larger than about 328 feet can survive long enough to hit the ground.

“The United States can and should continue to prepare for the possibility of a future asteroid threat,” Miles said. “Effective emergency response procedures can save lives and unlike most natural disasters, asteroid impacts are preventable.”

There were 18,310 known NEOs as of June 18 and more than 1,885 known PHAs, 57 of which are more than 3,280 feet — one kilometer — in diameter. Such objects are informally known as “planet busters” because an impact would trigger a global catastrophe. The impact of an asteroid about six miles in diameter some 65 million years ago led to the extinction of the dinosaurs and many other species.

“NASA is confident that it has discovered and cataloged all near-Earth asteroids large enough to cause significant global damage and determined that they are not on collision courses with Earth, but there is still some chance that large comets from the outer solar system could appear and impact the Earth with warning times as short as a few months,” the action plan says.

In 1994, Congress ordered NASA to identify and characterize, within 10 years, 90 percent of all comets and asteroids with diameters greater than one kilometer — .62 miles, or 3,280 feet — that travel in orbits that can intersect Earth’s path around the sun.

In 2005, the search was expanded to include the identification of 90 percent of near-Earth objects with diameters greater than 460 feet.

“Since 2005, the number of NEOs catalogued in this range has almost tripled, while the total number of catalogued NEOs has increased by almost five times,” the action plan states. “Nevertheless, according to a 2017 report from NASA’s NEO Science Definition Team, current observational capabilities are suited to only finding less than half of all 140 meter objects by 2033, and planned improvements will still fall short of the timeline that Congress directed.” 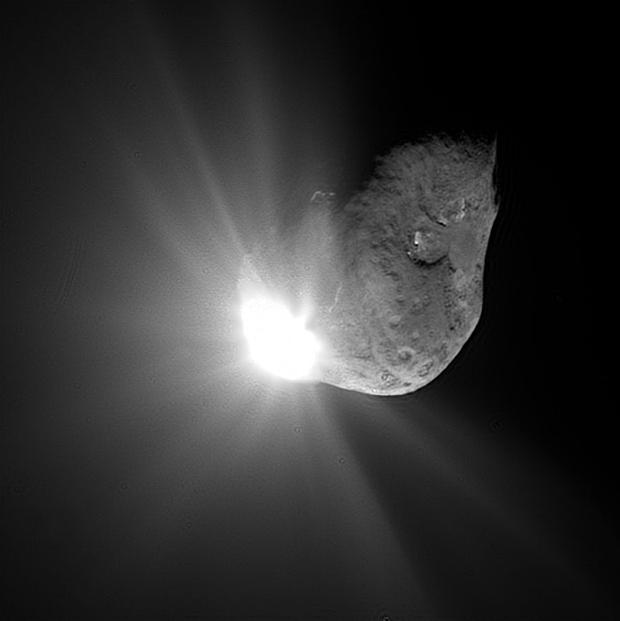 One technique for possibly diverting an approaching asteroid would be to crash a robotic spacecraft into the target at high speed. This image shows the explosion caused when a small 820-pound impactor launched by NASA slammed into comet Tempel 1 in 2005 at a relative velocity of 23,000 mph.

The action plans calls for expanding the search for NEOs, streamlining inter-agency communications to deal with possible threats, educating state and local emergency management personnel and developing more detailed plans to deflect an asteroid on a collision course with Earth.

Lindley Johnson, a senior planner with the Planetary Defense Coordination Office at NASA Headquarters in Washington, said engineers envision three basic techniques for deflecting an incoming asteroid, all of which require months or years of advance warning.

One method would use a so-called “gravity tug,” a spacecraft that would fly in tandem with the approaching body to gently nudge it off course with its own minuscule gravity. Another technique calls for crashing a robotic spacecraft into an asteroid at extremely high speed to knock it off course. A demonstration flight is planned in the early 2020s.

A third, more drastic, option would be to detonate a nuclear device near the approaching body, not to break it up but to heat its surface to the point that the plume would effectively blow it off its trajectory.

But any such flight would require advance warning, enough to launch spacecraft on missions laster longer than a year to reach the target far enough out to deflect it from Earth.

Despite President Trump’s call Tuesday for establishment of a new “Space Force,” Johnson said no astronauts would be involved.

“It makes a good movie,” he said, but “the type of missions that you’re talking about here that are months or years in duration make it difficult with our current capabilities for human spaceflight. Our studies just don’t show that is a needed element.”