Washington — U.S. Immigration and Customs Enforcement (ICE) has set up a new information-sharing initiative with the government agency responsible for taking care of unaccompanied migrant minors, sparking fears it will use biometric data to detain and deport immigrant adults who try to sponsor children family members who are in U.S. custody.

In recent weeks, ICE started a new joint effort with the Department of Health of Human Services (HHS) to oversee biometric screenings of adults who try to sponsor children in the custody of the Office of Refugee Resettlement (ORR), the agency within HHS that oversees shelters for migrant minors.

ICE spokesperson Bryan Cox told CBS News the inter-agency cooperation, which was not publicly announced, is designed to prevent migrant children in U.S. custody from being placed with sponsors who could be dangerous. He said that HHS, unlike ICE, does not have a mechanism to detect fraudulent documents or a government-run system to conduct background checks on potential sponsors.

“The intent of the ICE detail was to help decrease these vulnerabilities in HHS screening and vetting procedures, thereby increasing the welfare and safety” of migrant children in custody, Cox said.

The new initiative, which includes increased sharing of fingerprint and criminal history data, was first reported by The Washington Post. Citing HHS officials, The Washington Post reported that the White House recently tried to install a top ICE official at ORR to oversee the increased information-sharing between the two agencies, but the plan was thwarted by HHS leadership.

Advocates were quick to denounce the initiative, fearing that ICE could be meddling in the internal affairs of America’s refugee agency to continue the Trump administration’s crackdown on undocumented immigrants. They noted that ICE has previously tried to use data gathered from undocumented immigrant adults seeking to sponsor children family members with the aim of detaining and deporting them.

“We must stop these renewed efforts to use HHS data to deport relatives and families of migrant children — it will only result in more trauma and pain for vulnerable children,” Democratic Congressman Joaquin Castro of Texas said in a statement to CBS News.

In March 2018, HHS signed a memorandum of agreement with ICE and Customs and Border Protection, agreeing to provide sensitive information about children in its custody, as well as from people who request to sponsor the minors. A report by advocacy groups found that fewer sponsors were coming forward as result of the agreement because they feared that any information they provided to HHS could be used by ICE for immigration enforcement actions against them.

This February, however, House Democrats worked to restrict this through the Homeland Security appropriations bill that became law. They added language designed to limit ICE’s ability to go after potential sponsors of children or members of their household.

Castro, who chairs the Congressional Hispanic Caucus, accused White House senior adviser Stephen Miller, one of the architects of the administration’s hardline immigration agenda, of being behind the move, which the Texas Democrat said is an attempt to undermine congressional authority.

“Congress explicitly included a prohibition to prevent ICE from using HHS information to deport sponsors,” Castro said. “Nevertheless, Miller is trying to circumvent Congress and create a new crisis at HHS for the sole purpose of inflicting cruelty on immigrants.”

The White House did not immediately respond to a request for comment about Miller’s potential involvement in the effort.

Cox, the ICE spokesperson, said the new initiative is “fully compliant with the law” and devised to disqualify individuals with criminality or “other negative factors” from sponsoring children in U.S. custody.

The appropriations law passed this year, he added, does not protect immigrants whose sponsorship requests are rejected by HHS, suggesting they could be targeted for detention and removal. HHS has been sharing information about rejected sponsors with ICE, according to Cox. 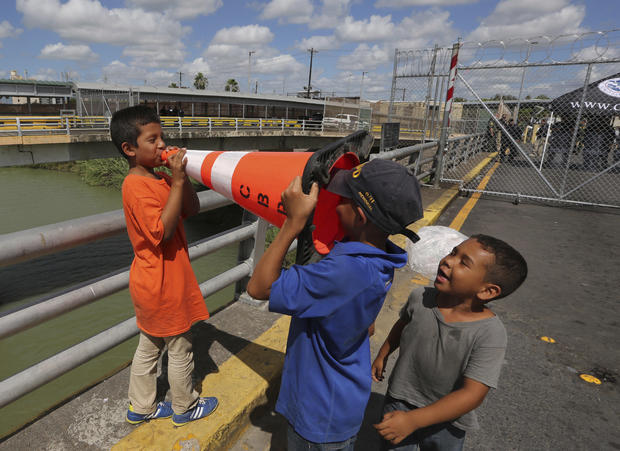 ICE confirmed the new initiative could cause children to remain in HHS custody for longer periods of time. But the agency said the upshot is more consequential.

“While improvements in screening, vetting and information sharing may result in a slightly longer length of stay in ORR custody, ensuring the identity of a sponsor and quality of placement should take precedence over speed of placement to what may ultimately be an unsafe environment for” the child, Cox said.

But Cox also said increased information sharing between the Department of Homeland Security and HHS could allow the refugee agency to find sponsors for children more quickly through Border Patrol data of apprehended family members.

Asked if the information-sharing effort could send a chilling effect to all potential sponsors, particularly those without a legal status who fear enforcement actions by ICE, Cox replied, “not at all.”

Potential sponsors who provide accurate information and do not have “disqualifying factors” should have “no reason to be fearful,” he added.

Under U.S. law, the Department of Homeland Security, which oversees the Border Patrol agents who are usually the first to encounter migrants near the border, is generally required to transfer unaccompanied migrant children in its custody to HHS within 72 hours. The children stay in HHS custody awaiting sponsors, who are typically family members living in the U.S.

Immigration hardliners have often derided the sponsorship process as a “loophole” used by undocumented immigrant parents who pay smugglers to help their children travel to the U.S.-Mexico border alone. Trump administration officials have supported proposals to deter immigrants from doing this by sending a message that ICE can detain and deport them if they try to sponsor their children.

But advocates have long argued there should be a barrier between child protection services and immigration enforcement.

There are currently more than 4,000 unaccompanied minors in U.S. custody.

Spokespersons for HHS and ORR did not respond to requests for comment about the new initiative.