Decades before “The Girl with the Dragon Tattoo” author Stieg Larsson became one of the world’s most famous crime novelists, he spent years researching a real-life case that’s considered Europe’s JFK assassination: the murder of Swedish Prime Minister Olof Palme. The left-wing social democrat was gunned down on the streets of Stockholm in 1986 but his murder remains unsolved. Now, a journalist has used Larsson’s extensive archives to crack open the cold case.

Larsson, who died just before the publication of the trilogy that would make him famous, feverishly researched the assassination for months while working at Sweden’s largest news agency. Even years later, he would often talk about the Palme killing, according to his former colleague Daniel Poohl, who would become caretaker of Larsson’s archives of the Palme case. Eight years ago, Jan Stocklassa asked to see them.

“Olof Palme was our most important prime minister. He was internationally acclaimed,” Stocklassa told CBS News’ Don Dahler. “He had enemies all over the world.”

Stocklassa, an architect by training, was researching a book on crime scenes when he came across a Palme-related paper written by Larsson. That was the tip of the iceberg: Troves of research were sitting in a storage facility.

“When this sheet metal door rolled up, and I saw these 20 boxes full of papers, full of Stieg’s documents, that was the start of a journey,” he said. “That day, I realized he had a real theory in who killed our prime minister.”

Swedish authorities had their own theories. They eventually prosecuted a known criminal, whose conviction was overturned on appeal. Larsson, who was an expert at mapping and infiltrating right-wing extremist groups, suspected an international conspiracy almost too big believe.

“Stieg Larsson thought that it was South Africa that instigated the murder, and for reasons connected to the weapons trade all over the world that was going on at the time, connected to the Iran-Contra affair. That was the motive behind it,” Stocklassa said. “there was a war going on, the end of the Cold War, and one of the places where they were carrying out the war was South Africa.”

According to Stocklassa, Palme was using the Swedish government and customs to stop weapons deliveries from going to Iran and was planning to go public with what he knew about those dealings.

Larsson died in 2004, robbing him of the fame that would come from his novels and stalling his search for Palme’s killer. But Stocklassa would go on a mission to further Larsson’s research, which he writes about in the real-life thriller: “The Man Who Played with Fire.”

The murder itself seemed like such a bumbling bunch of mistakes. They used the wrong weapon, too powerful for that purpose. They used ammunition that pierces metal, so it could’ve very easily just gone right through his body and not killed him.

The prime minister and his wife had just left the cinema when the assailant killed him with a single shot and then fled into an alley up 89 stairs.

“One thing that I thought a lot about was actually, ‘Would Stieg do this? And he did this in real life. They were hacking emails in his work against right-wingers. They were doing undercover operations. So, this is just true, what he’s writing in his novels. And then I decided, I can also,” he said.

Stocklassa traveled to northern Cyrus under an assumed identity to meet with the subject of Larsson’s 30-page memo back from back in 1986, a Swedish citizen Stocklassa believes might be the middleman in Palme’s killing.

“Meaning that, on one side, you have South Africa, and on the other side, you have individuals among the right-wing extremists of Sweden. At the time of the murder of Olof Palme, he was working for the South African secret service for a person called Craig Williamson.” 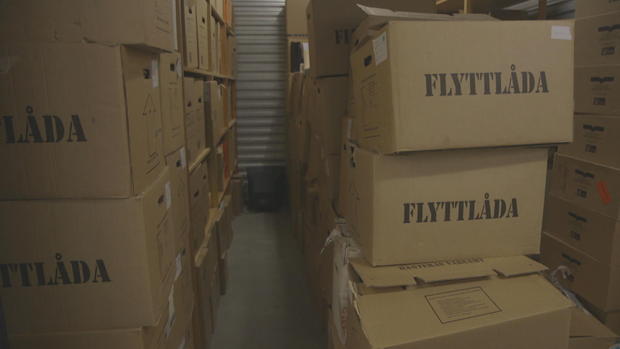 Williamson, a longtime military and intelligence spy for South Africa’s apartheid government, spoke with Stocklassa on the record.

Olof Palme had been one of the world’s fiercest critics of South African apartheid. Williamson has admitted to numerous acts of terrorism on behalf of that government, including the 1982 bombing of the African National Congress headquarters in London. He was granted amnesty as part of the truth and reconciliation commission after the fall of apartheid. He denies any involvement in the Palme assassination but he sent Stocklassa a news article that suggests his theory might have merit.

Stocklassa also enlisted the help of Lida, a woman from Prague he met online, who goes undercover to befriend another suspect, Jakob Thedelin, who was seen spitting on the grave of Olof Palme. Both names are changed to protect their identities.

“I realized that she’s something of a real Lisbeth Salander from a Stieg Larsson book. She’s a person who was asked the question, ‘Can you do this?’ And she says yes before realizing that she could say no.”

“Towards the end, I realized that there may actually be the case that Jakob Thedelin has the revolver that killed our prime minister,” Stocklassa said.

The book is being published in more than 50 countries in 27 languages, but the first copy was given to Swedish investigators, who Stocklassa told, “Here you have the manual to solve the killing.”

He believes they will.

Police claimed for years the case had been solved despite the original conviction being overturned but they have finally admitted that man did not commit the murder.