Imagine climbing to the top of a peak more than five miles high, an elevation mountaineers call the “death zone.” The air has about one-third of the oxygen it does at sea level and the human body literally starts shutting down.

Now think about skiing all the way down. It may sound impossible, but one couple got into the record books by doing exactly that.

Adventurers Hilaree Nelson and Jim Morrison are two of the world’s most elite skiers. They’ve both overcome incredible challenges – physical and emotional – to reach the pinnacle of their sport.

CBS News correspondent Jan Crawford met them on the peaks of the San Juan Mountains, some of America’s highest at 12,000 feet, where Nelson and Morrison showed their training grounds for the impossible. Their focus was half a world away: the 28,000-foot Lhotse in the Himalayas.

Last fall, after three years of preparation, they not only climbed up it, but they also skied down.

Seven-thousand feet down its face, they faced vertical drops in uncharted, unimaginable conditions. There was no room for error in what Nelson described as “some of the most variable, challenging, death-defying conditions I’ve ever experienced.” 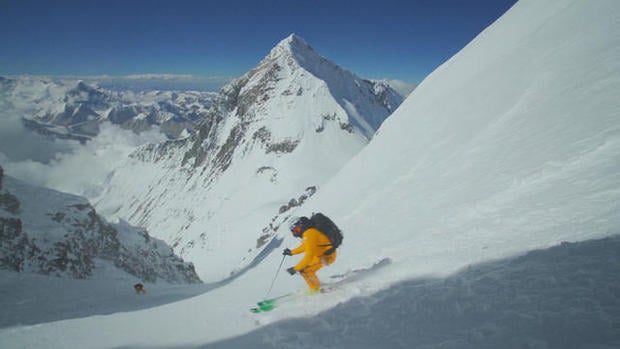 “The smallest thing that goes wrong with your plan can mean a big difference between your eventual success or failure,” Morrison said.

Or even life and death.

What drives people like Nelson and Morrison to push their limits? Nelson grew up playing sports before skiing became her passion.

“I think there’s something really powerful about being persistent at something,” Nelson said. “And I think it’s really important to live outside of this box we all create around ourselves and tell us what you can and can’t do.”

Now a mother of two boys, she also sees her career as a lesson for life.

“More than anything, they understand the lesson is that it’s really hard to take that first step,” Nelson said. “Just try. And you might not be able to do it, but at least you tried, and so then you know where – how far you can push yourself a little bit further the next time.”

Pushing their way up Lhotse came with its share of suffering. But for Morrison, the physical pain on the mountain was nothing compared to the emotional trauma he went through seven years ago – a trauma that’s driven him to scale the world’s highest peaks.

“I lost my wife and children in a plane crash in 2011. And my world was ended in an instant,” Morrison shared.

“Did you ever think you just can’t go on?” Crawford asked him.

“How do you get through that?”

Four years after the tragedy, while climbing in Nepal, Morrison met Nelson, who had gone through a painful divorce. Six months later, they began a romantic relationship.

“I’d give anything in the world to not have had him go through what he — you’ve gone through. But… not having that ability to take those things away has made us who we are,” Nelson said.

Morrison’s path to healing came full circle last spring while he was on a peak next to Lhotse, Mount Everest.

“I spent about 45 minutes climbing by myself in this place that I was totally connected to my kids,” Morrison said. “And I felt like I was closer to them than I’d been in years.”

He said he talked to them and himself. “I giggled and laughed and I was totally alone at 28,000 feet,” Morrison recounted.

“It was like I was on the edge of heaven,” Morrison said.

A few months later, Morrison was back on the roof of the world on Lhotse. This time his companion was the woman who is defining the next chapters of his life.

“I think we’ve been through enough experiences that we really appreciate just being in the moment,” Nelson said.

And those moments – now shared together, whether on Lhotse or in their Rocky Mountain back yard – are pretty spectacular.