The police chief of Burlington, Vermont resigned Monday, four days after admitting that he set up a Twitter account under a fake name and used it to attack a local community activist who criticized him. Hours later, his replacement was fired for targeting the same community activist with a different account on Facebook.

Chief Brandon del Pozo was initially confronted in July by Seven Days reporter Courtney Lamdin about the account, which was used to tweet at the activist Charles Winkleman 10 times over the course of about an hour. In a recording of his conversation posted to the Seven Days website, del Pozo can be heard repeatedly denying involvement in the “WinkleWatch” account.

“Suffice it to say… I don’t respond to him on Twitter and I don’t have sockpuppet accounts,” del Pozo said. A sockpuppet is an online persona used to hide a person’s true identity.

The anonymous account was deleted soon after the tweets were posted, but Winkleman saved screenshots.

Weinberger said in a statement that del Pozo “self-reported” the account on July 28. The mayor’s statement said that he initially placed del Pozo on administrative leave, but at the time members of the press were told del Pozo’s six week leave was taken for medical reasons. In his statement, Weinberger said the administrative leave was converted to medical after he was advised that an underlying mental health issue contributed to the chief’s behavior. Del Pozo was hospitalized in 2018 after suffering skull fractures, brain bleeds and a concussion in a bicycle accident.

“Early in the course of the investigation, the City Attorney and HR Director learned that the Chief had an underlying mental health condition that had impacted his actions,” Weinberger said.

Yesterday, amid mounting questions over the city’s handling of del Pozo’s Twitter deceit, the chief announced his resignation.

In a statement posted to del Pozo’s real Twitter account, he said he wants to start a research center focused on policing and public health. His statement does not mention the fake account.

Del Pozo did not reply to an email from CBS News. 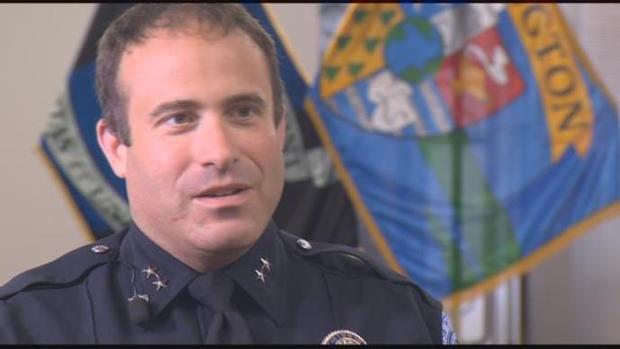 Soon after del Pozo’s statement was posted, Weinberger announced that Deputy Chief Jan Wright would serve as del Pozo’s replacement in the interim.

But Wright’s tenure lasted only through dinner.

In a statement sent to media early Monday evening, Weinberger’s office announced that “soon after today’s press conference at the police department, Deputy Chief Jan Wright shared with Mayor Weinberger that she had occasionally operated a Facebook account under the name ‘Lori Spicer,’ through which she made comments about and engaged citizens in discussion of Police Department policy and practice.”

Winkleman was also targeted by the “Lori Spicer” account.

“You are obsessed with Chief del Pozo. You can’t get enough of him. He definitely lives rent free in your head. Seek help,” she said in one post.

Weinberger’s Monday evening statement said that the city’s latest interim chief, Jon Murad, “has confirmed explicitly to the City Attorney” that “he has never engaged in anonymous social media posting.”

In an email to CBS News, Winkleman called on the mayor to resign.

“It seems pretty clear Mayor Weinberger only came forward when I posted my evidence and he was caught. Allowing me to spend the last five months sitting with a ton of stress was shameful. And it’s not surprising,” Winkleman wrote.

He credited Lamdin for getting to the bottom of “WinkleWatch.”

“If it wasn’t for Courtney Lamdin I doubt the mayor or chief or deputy ever would have admitted any of this,” Winkleman wrote.

In a phone call with CBS News, Lamdin said questioning mayors and police chiefs is what reporters do.

“It’s our job to ask people in power these somewhat uncomfortable questions sometimes, and I do appreciate Charles saying that, but I think that … it just happened to be me. It could have been any other reporter,” Lamdin said.